One Loss, One Gain 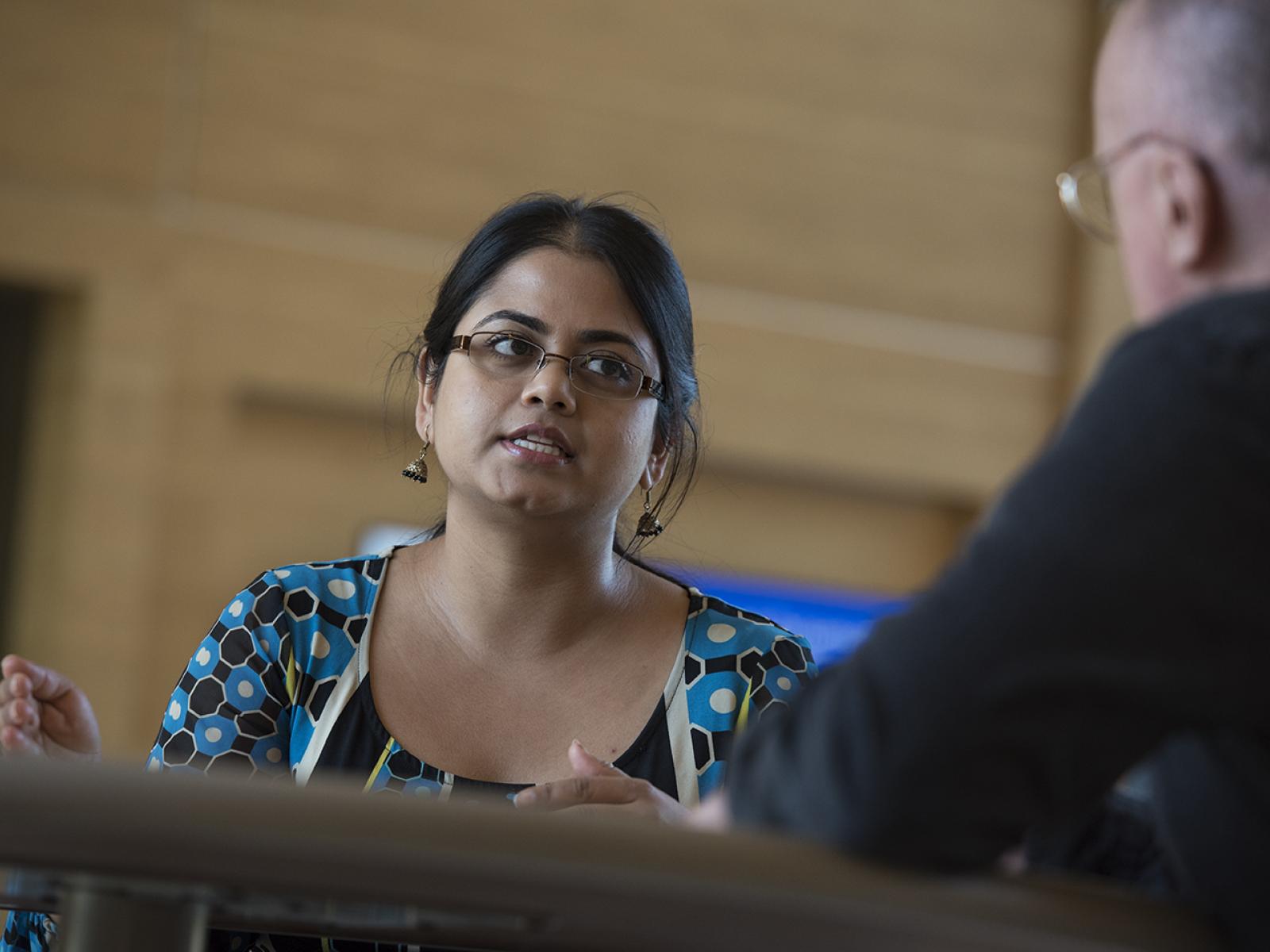 This is one in a series of occasional features profiling postdocs in the Biological Sciences Directorate at Pacific Northwest National Laboratory.

There are more microbes in a single teaspoon of backyard soil than there are human beings on Earth. But there is only one Taniya RoyChowdhury.

In October, the young soil scientist is leaving the Pacific Northwest National Laboratory (PNNL) for the University of Maryland. There, with Chesapeake Bay as her field site, the India-born researcher will pursue her science love: wetlands ecology, and the part that microbes play in it.

The move for RoyChowdhury comes after nearly three years as a postdoctoral researcher at PNNL. It leaves Maryland all the richer, and southeastern Washington State all the poorer. But sometimes nation-leaping move are part of the peripatetic life of a young scientist.

Before her time in the Northwest, RoyChowdhury was a postdoc at Oak Ridge National Laboratory in Tennessee, where starting in 2011 she studied the physical and chemical processes behind carbon and methane cycles in arctic tundra soils.

In her native India she was barely out of her teens when a six-month school experiment drew her to the secret life the pedosphere and to the diversity and complexity of the soil microbiome. "I was introduced to this world of soil microbes," said RoyChowdhury. "They were amazing."

At PNNL she was the chief postdoctoral researcher in the wetlands ecology group led by Janet Jannson as part of the Microbiomes in Transition (MinT) initiative. She had other mentors too. Among them were Vanessa Bailey (who directs the MinT wetlands group), James Stegen (who directs a MinT permafrost group), Heida Diefenderfer (a restoration ecologist at PNNL's Marine Sciences Laboratory), computational biologist Lee Ann McCue, and microbiologist Sarah Fansler.

"They nurtured the strengths I always had," said RoyChowdhury, and the Lab itself "bolstered my confidence as a scientist."

Since she started in February 2015, she added, "no one has ever told me, ‘You can't do this.' Being here has taken my confidence to the next level."

Now, and once they are all "independent scientists" too, added RoyChowdhury, she looks forward to years of scientific collaboration and personal friendship - enhanced by an ability to blend their different science approaches to soil. "In our generation, that's a gift in itself," she said. "We go beyond the box of soil science."

With these friends and many of her young peers, RoyChowdhury shares a big two-part dream: a place in academe, and a lab of her own. All the better to do ecological good, and to do good science.

At the University of Maryland, she will join an ecological engineering group run by Stephanie Yarwood, and will be part of a long-term wetlands study sponsored by the U.S. Department of Agriculture and by the National Aeronautics and Space Administration.

Chesapeake Bay "has a huge history" as one of North America's most iconic and impactful wetlands, she said. "I'm very excited."

Meanwhile, said RoyChowdhury, who is still analyzing lab data and wrestling with a few PNNL papers, "It doesn't feel real that I'll be gone."

Lungs of the Earth

RoyChowdhury was a soil sciences doctoral student at Ohio State University when she was awakened to wetlands, which she now calls "the lungs of the Earth" for the ecosystem services they provide, including carbon storage, coastal water filtration, wildlife habitat, storm surge protection, and contaminant mitigation.

With her new Maryland colleagues, she will be studying two key wetlands processes. One is emissions of nitrous oxide. (Levels of the natural atmospheric gas can be accelerated by agriculture and other human activity.)

And the other is methane oxidation, a metabolic process carried out by microbes in both freshwater and marine sediments. Levels of methane in the atmosphere, and the natural processes that affect them, are a concern to scientists.

"We know that soil respires," she said of her work on the role of microbes in atmospheric gas exchanges, "but most of us don't actively think about it."

Curiously, the subject of methane oxidation takes RoyChowdhury right back to her key subject as a Ph.D. student in Ohio from 2007 to 2012. It gives her career, she said, a nice symmetry.

From Chemistry to Soil to Microbes

RoyChowdhury is a native of Kolkata, the sprawling coastal river city in West Bengal, India, which was until 2001 known as Calcutta. The daughter of a geologist father and a former student of English literature, the math-loving RoyChowdhury pursued a bachelor's degree in chemistry at the University of Kolkata, a science she still describes as her go-to discipline.

As an undergraduate, though, she was moved by the idea that science could have a great impact on the world's rapidly unfolding environmental crises. So RoyChowdhury earned a master's degree at Kolkata in soil science and agricultural chemistry.

From there, though it required a leap across the world, it was not much of a leap to sign on for doctoral work in soil science. Hence, RoyChowdhury found herself at Ohio State University, where the laboratories include an active wetland. She studied with soil microbial ecologists Richard Dick ("one of the stalwarts of soil enzymology," she said) and William J. Mitsch, an expert in the methane cycle who is now at Florida Gulf Coast University.

Ohio allowed RoyChowdhury to look at soil "at both scales," she said: the broadly ecological and the complexly microbial.

She remembers thinking on one of her first days there, when her muddy shoes were sinking into wetlands muck. "Do I really want to be here?"

She did. It did not take long for RoyChowdhury - then new to field work - to reflect on the ecological importance of the wet-earth membrane her shoes were sinking into: a breathing, vital locus of biodiversity at the critical interface of water, soil, teeming microbes, atmospheric gases, and vegetation.

Without wetlands, said RoyChowdhury, places like the Gulf of Mexico and Lake Erie were once badly threatened by oxygen starvation, an ecological state that bears a grim scientific name: hypoxia.

As a postdoc at Oak Ridge, away from the squishy lab wetlands in Ohio, RoyChowdhury was often on more solid ground. Frozen solid.

Her time there included one spring in Barrow, Alaska, where she helped retrieve intact frozen cores a meter deep, observed loping visits from polar bears, marveled at mini-igloo residential refrigerators, and - mostly - studied firsthand how to predict the fate of trapped permafrost gases. "It was a huge revelation," said Roy Chowdhury, "what the implications of this work might be."

For one, such high-latitude soils globally store more than 2,000 petagrams - over 2 trillion tons - of carbon. One big soil science question is: In a changing world, how can we predict and model where all the carbon will go, or stay? The role of microbes remain a big unknown.

RoyChowdhury's postdoc at PNNL drove deeper the implications of such science, and the fascination and commitment she felt for it. Her wetlands work has in the last few years rolled over into presentations in Canada and France, about the wetlands soil microbiome. An invited talk in May at the Smithsonian Institution precipitated her first interview at Maryland, and her meeting with Yarwood.

At Maryland, Roychowdhury will still be doing soil science at the microbial scale, but with the same eye to big-scale ecological concerns.

"Working at PNNL has been a gift to me," she said. "They give you that intellectual freedom. Work doesn't seem like work. They treat postdocs like peers."

RoyChowdhury will miss more than her friends at the Lab, including her 9-minute commute by car. In some neighborhoods of the Tri-Cities in southeastern Washington State, cows still graze.

In Maryland, she will live in Silver Spring, quite a distance by train from College Park. "My life," said RoyChowdhury, "is going to change."