Microbiomes More in Flux in Patients with Inflammatory Bowel Disease 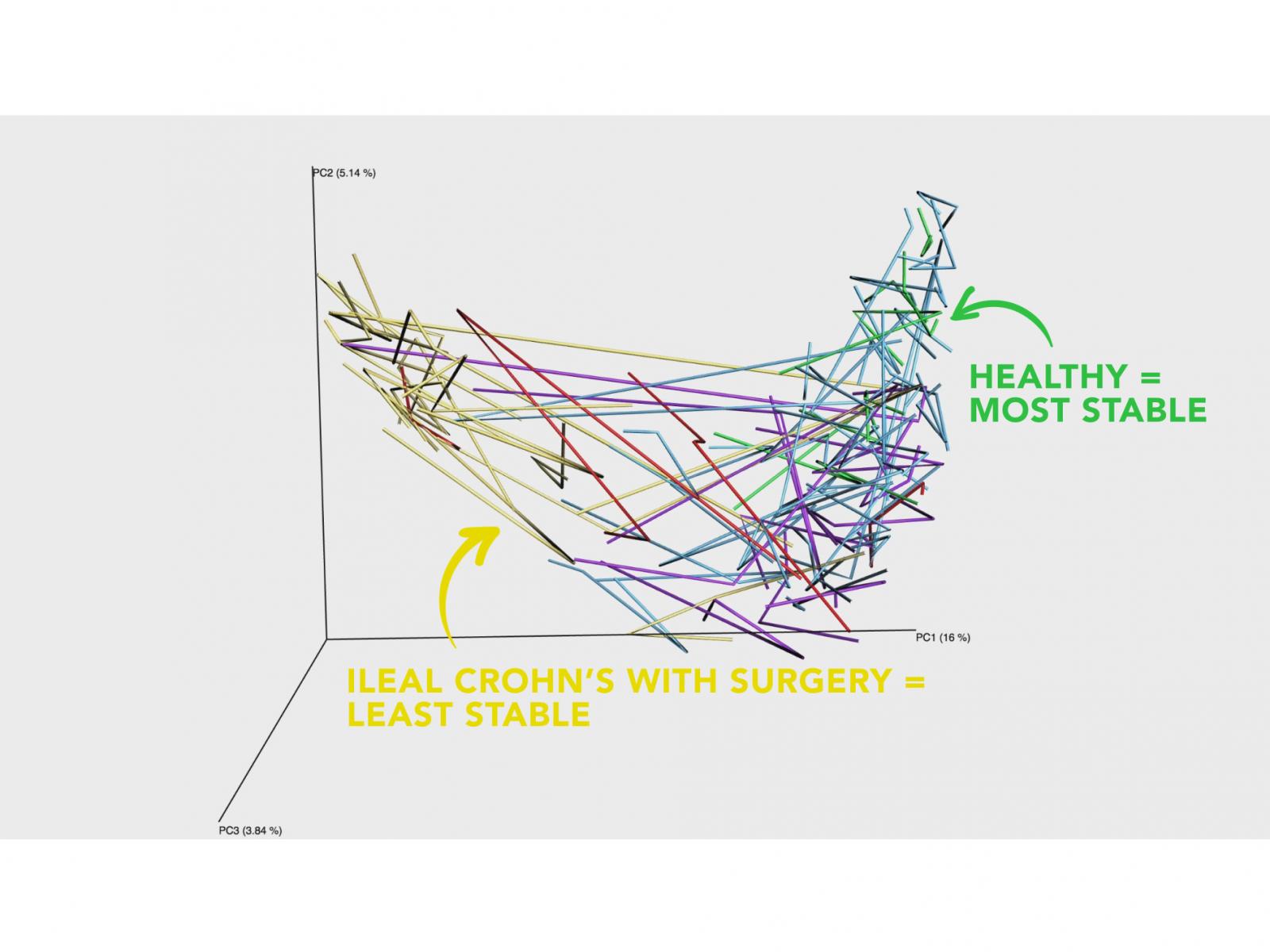 Gut microbial communities of people with inflammatory bowel change much more than those of people without the disease. For a fuller explanation of this illustration, view the brief video below.

Patients with inflammatory bowel disease are more likely to see dramatic shifts in the make-up of the community of microbes in their gut than healthy people, according to the results of a study published online Feb. 13 in Nature Microbiology.

While scientists have known that there are differences in the bacteria and other microbes that make up the gut microbiome in IBD patients, this is one of the largest studies to watch the microbiome over a period of time. The findings indicate that the biggest difference in the microbiome of patients is the way it fluctuates — what the researchers call "volatile dysbiosis."

The results help physicians and scientists understand the disease more fully and potentially offer new ways to track the disease and monitor patients.

The findings come from a team of scientists from Sweden, Spain, Germany and the United States. Janet Jansson of the Department of Energy's Pacific Northwest National Laboratory is the corresponding author of the paper.

"We know that there are some key beneficial microbes that are lower in number in people with inflammatory bowel disease. Sometimes the differences are quite substantial," said Jansson. "Our latest results show that patients affected by this condition also have a much less stable gut microbiome than healthy people."

IBD encompasses a group of diseases where the body's immune system attacks microbes in the gut, causing chronic inflammation in the digestive tract and giving rise to symptoms such as diarrhea, abdominal pain, and other unpleasant and sometimes life-threatening symptoms. Many patients have periods when the condition causes minor problems, then flares up and becomes more serious. Medications such as powerful anti-inflammatory drugs and steroids are common treatments, and surgery is an option in severe cases.

Scientists know that there are some differences in the microbiomes of patients with IBD patients compared to healthy people — for instance, patients generally have fewer beneficial microbes and they are more likely to carry bacteria such as Enterobacteriaceae and E. coli. But questions remain.

"It's important to know not just what microbes are present, but also to understand how the microbial community changes as patients' symptoms improve or worsen over time," said author Colin Brislawn, a PNNL scientist who contributed to the statistical analysis. "We explored the dynamic nature of the disease as it relates to the dynamic nature of the human gut microbiome."

To do the study, gastroenterologist Jonas Halfvarson of Örebro University in Sweden and colleagues studied 137 people for two years. Participants included patients with ulcerative colitis, colonic Crohn's disease, ileal Crohn's disease, and healthy controls. Physicians collected fecal samples from patients every three months for up to two years and monitored patients' symptoms. Overall 683 fecal samples were collected. Scientists then used genetic sequencing technology to identify the microbes in the samples.

The team found that in healthy people, the gut microbial community is much more consistent over time than in patients with IBD. Patients with IBD have dramatic shifts in their microbiomes, with some bacteria disappearing almost completely at times — something that rarely happened in the healthy people studied. In some IBD patients, more than half their microbiome was displaced by other microbes in just a few months. The biggest swings were seen in patients with ileal Crohn's disease who had had part of their intestine removed to alleviate their symptoms.

The scientists say the findings might one day contribute to the diagnosis of patients or allow physicians to follow the course of the disease and track the effectiveness of medication in patients more closely.

"The results are an important step in our aim to understand how the microbiome relates to the dynamics of inflammatory bowel disease," said Halfvarson. "Ultimately, manipulation of the microbiome, aiming to mimic the situation and the trajectories of healthy individuals, might become an attractive treatment strategy to maintain IBD patients in remission, especially if immunosuppressants such as corticosteroids can be avoided."

The study was funded primarily by the National Institutes of Health. Additional support came from the Crohn's and Colitis Foundation of America, the Örebro University Hospital Research Foundation, the Swedish Research Council, and other organizations.

Dynamics of the human gut microbiome in inflammatory bowel disease