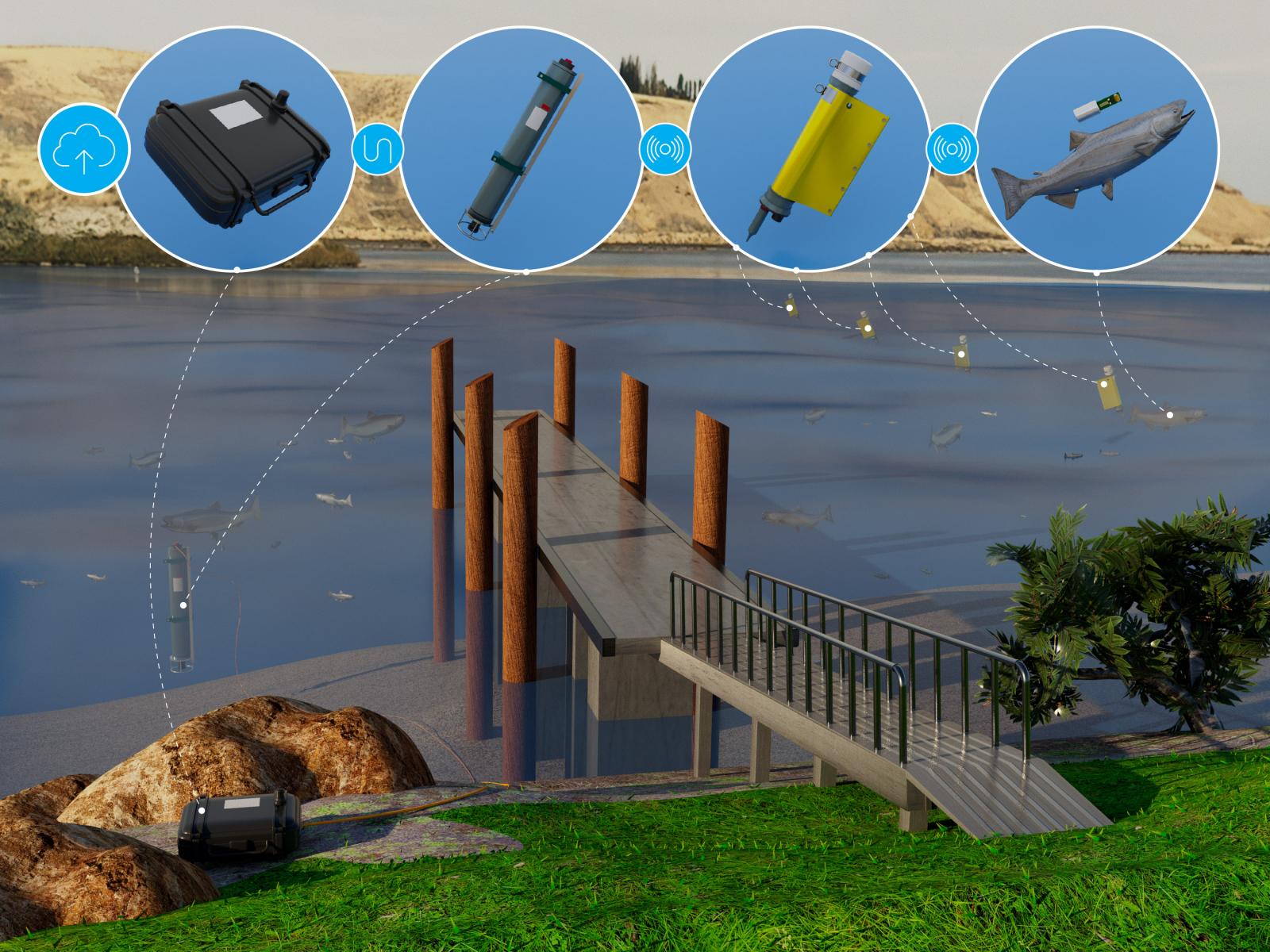 The fastest way to track a fish is to use the cloud, figuratively speaking. A new acoustic receiver developed by researchers at Pacific Northwest National Laboratory (PNNL) and published in the journal IEEE Internet of Things, sends near-real-time fish tracking data to the digital cloud, providing timely information to dam operators and decision-makers about when, where, and how many fish are expected to pass through dams. Instead of relying on seasonal estimates of fish migration from previous years, these data from tagged fish support more informed decisions about dam operations that affect fish passage.

“This receiver provides up-to-the-hour data to dam operators to assist in making informed day-to-day decisions in support of fish passage, like adjusting water flow when it’s clear that a large group of juvenile fish are approaching the dam,” said Jayson Martinez, a PNNL mechanical engineer who co-developed the receiver.

Hydropower dams are an important source of dependable renewable energy, generating about six percent of total electricity in the United States. Helping fish navigate them safely is a key part of reducing dams’ environmental impact. The new receiver is a critical piece of the puzzle in the ongoing endeavor to improve fish passage.

Updates on the hour

To track a fish, you need two pieces of equipment: a transmitter located on or within the fish itself and a receiver in the water to pick up the transmitted signal. Martinez and Daniel Deng, PNNL Laboratory fellow and mechanical engineer, developed the new receiver technology with their collaborators as part of a long-term effort to improve both transmitters and receivers.

“For the last two decades, acoustic telemetry has been the researchers’ tool of choice to provide high accuracy, remote fish tracking,” explained Deng. “We’ve been working on making better, smaller transmitters that can be used to study more fish species and life stages. But improving the transmitter is only half of the challenge, the other half is improving the receiver.”

Currently available receivers come with some significant limitations. Cabled receivers can transmit data to shore in real-time, but they must be powered by onshore infrastructure, which limits their placement to areas where power is available. Autonomous receivers can be deployed in locations without cabling and onshore infrastructure, but they must store tracking information locally until it can be manually collected—meaning fish tracking data are not available in real-time. To address these limitations, Martinez, Deng, and their collaborators developed an autonomous acoustic receiver that can wirelessly upload information to the cloud while deployed underwater in remote or hard-to-reach locations along streams and rivers.

“Our ultimate goal is to try and provide real-time information on fish location and health, and this receiver is a big step towards that goal, providing hourly data updates to dam operators,” said Deng.

Computing on the edge

Transmitting data wirelessly underwater is an extremely slow process—up to 3 million times slower than the average speed of home cable internet. To get around this problem, researchers used edge computing to minimize how much data needs to be wirelessly transferred from underwater to the cloud. Edge computing is an approach that enables improved and efficient data processing by moving computing closer to the data source itself—in this case, the fish tracking data is processed at the receiver before being transmitted to the cloud.

Typically, when fish tagged with acoustic transmitters swim by autonomous receivers, that data is collected and stored locally until someone visits the receiver and downloads the data. This not only takes considerable time and money, but it also involves important safety considerations because researchers often need to navigate to the receiver by boat. Plus, it’s not foolproof.

“What if you need to leave a receiver out for two months before someone can collect the data? If something goes wrong with the receiver during that time period—like a sensor being flooded with water or a battery running out—there’s no way to know that, so you could lose the entire two months of data,” said Martinez.

Incorporating edge computing into the new receiver eliminates those issues. The new receiver collects data from fish transmitters as the fish swim by, then processes and compresses the data. Every hour, the compressed data is wirelessly sent to a small modem located onshore, which uploads the data directly to the cloud, where dam operators and decision-makers can access it. This provides near-real-time fish tracking and a heads up if something goes wrong with the receiver so any issues can be resolved quickly, minimizing data loss.

“There’s a lot of energy saved during data transmission, which translates to more data that can be transmitted with less power, making the system more robust and efficient,” explained Martinez. “You could even potentially run the onshore acoustic modem using renewable energy, like a solar-powered battery.”

More than just a fish tracker

Another exciting aspect of the receiver is its potential to do much more than track fish—it’s a flexible platform that could accommodate multiple sensors to collect a variety of data. These receiver platforms could provide simultaneous near-real-time data on water quality and environmental conditions along with fish location, answering valuable questions about fish and river health in a changing climate.

“Real-time information about fish location and environmental conditions, including in remote or difficult to access areas, are potentially very valuable for building environmental models to understand river habitats and fish populations in light of climate change,” said Martinez.

Now that the receiver has been demonstrated in a controlled testing environment, the scientists plan to adapt it for a large-scale deployment in the future. In addition to Martinez and Deng, the team included PNNL researchers Yang Yang, Robbert Elsinghorst, Hongfei Hou, and Jun Lu. Deng holds a joint appointment at Virginia Tech. This work was funded by the Department of Energy’s Water Power Technologies Office and Office of Technology Transitions.