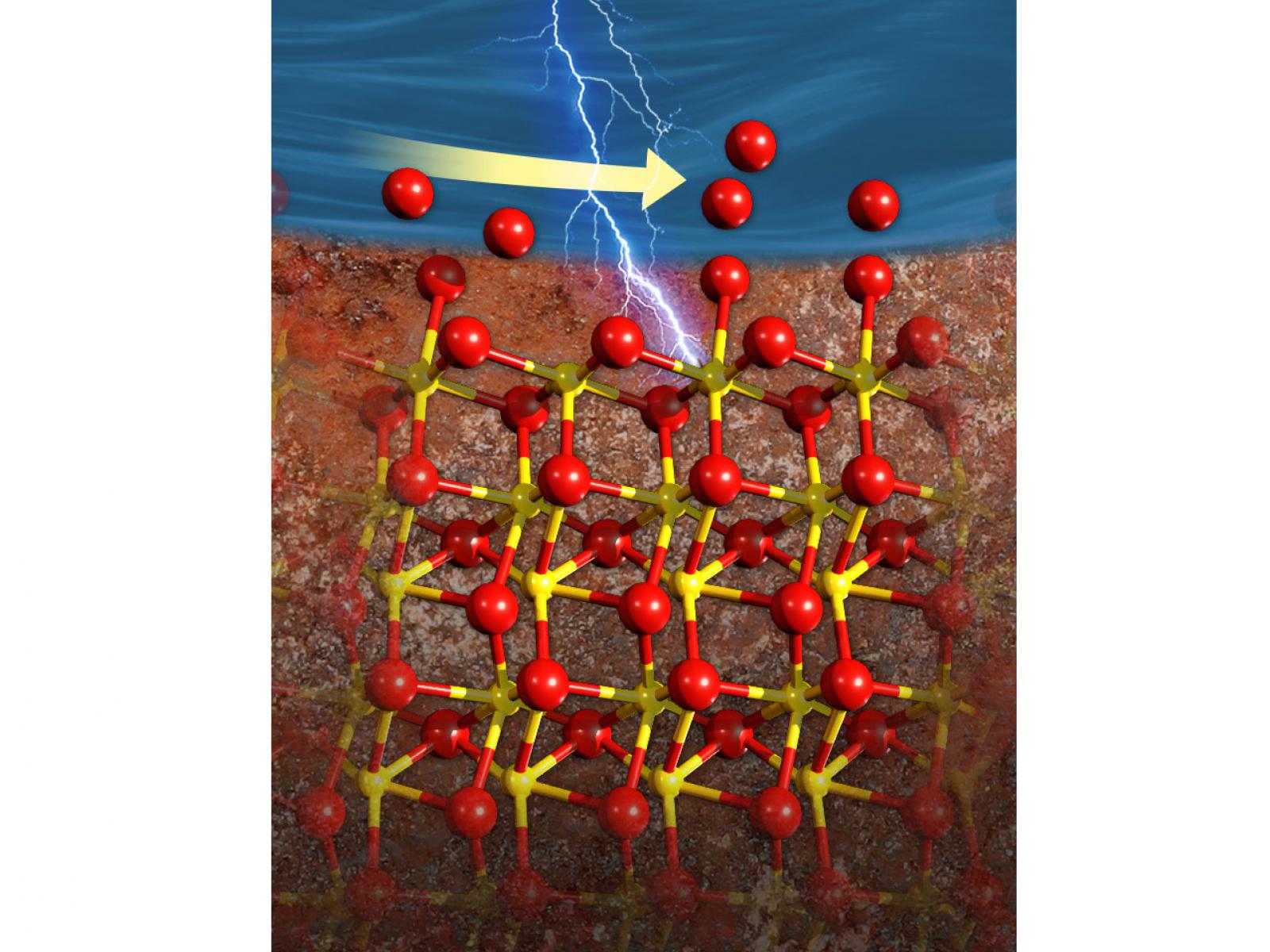 The interface between iron-rich hematite (bottom) and water (top) changes as the surface becomes electrically charged. Oxygen atoms (red) re-arrange on the surface, filling in any spots where oxygen atoms were missing. This image was selected for the back cover of the journal.

Minerals that make up rocks and soils are thrown out of equilibrium when the chemistry of their surroundings changes. Shifts in pH or the concentration of ions in water make minerals dissolve, grow, or react in other ways, including the uptake or release of pollutants. These reactions are influenced by the arrangement of atoms at the interface -- where minerals and water touch. Historically, it has been hard to study these structures while reactions are proceeding because the interface is constantly changing, limiting our understanding of how the structures control reaction speed.

Now, a team led by Dr. Kevin Rosso at DOE's Pacific Northwest National Laboratory (PNNL) determined the structure of the changing interface of water and the mineral hematite as the reactions occur. During the reaction, the interface is far from equilibrium. The team’s findings -- which take the study of atomic structure to a whole new level of detail -- reveal the arrangement of solvating water molecules changes dramatically when environmental conditions change (such as in response to applied electric potential). This research offers new insights into how atoms in the mineral and the water molecules rearrange during charging, how these structures control the flow of electrical charge, and ultimately how this information is essential to understanding how minerals dissolve.

Why It Matters: Water. Whether it is transporting nutrients, dissolving hillsides, mediating chemical reactions, or splitting to make hydrogen fuel, accurately modeling water's behavior is vital. This work is the first systematic study of the tiny structures that form at the interface of water and the abundant iron-rich mineral hematite when this interface is far from equilibrium. The research offers key insights about the interface and far-from-equilibrium conditions that influence the interface.

"These precise measurements will help us build better models of reactions vital to groundwater quality, solar water splitting, and much more," said Dr. Martin McBriarty, a PNNL geoscientist on the project.

Summary: The minerals that make up rocks and soils are often out of equilibrium with their surroundings, especially as environmental conditions change. Minerals respond by dissolving, growing, or transferring charge with their environment, which can result in the uptake or release of pollutants. These processes are influenced by the atomic-scale structure at their interface with water. Often the only way to study these structures is when the interface is not changing.

Now, researchers at DOE's Pacific Northwest National Laboratory and the University of Chicago obtained the first 3-D view of the atomic structure at the interface of water and the mineral hematite while the hematite is acting as an electrode. The team saw in exquisite detail how the atoms at the hematite surface and water molecules nearby responded to far-from-equilibrium conditions caused by electrically charging the interface. When the surface was negatively charged, some water molecules became stuck to the surface, while other water molecules became disordered and moved away from the surface.

What do these structural changes mean? The flow of electrical charge and ions are controlled by the structure while the interface is charged, and the stronger binding of water molecules at the surface might explain why hematite dissolves more slowly than predicted.

The team's approach to solving these far-from-equilibrium structures could be used to study other interfaces. This is the first systematic study of the atomic- to nano-scale structure of a common mineral-water interface poised far from equilibrium. The research offers a major advance to accurately modeling reactions important to everything from groundwater quality, to energy extraction from the subsurface, to solar water splitting. Understanding a complex interface is also crucial to catalysis and other energy materials applications.