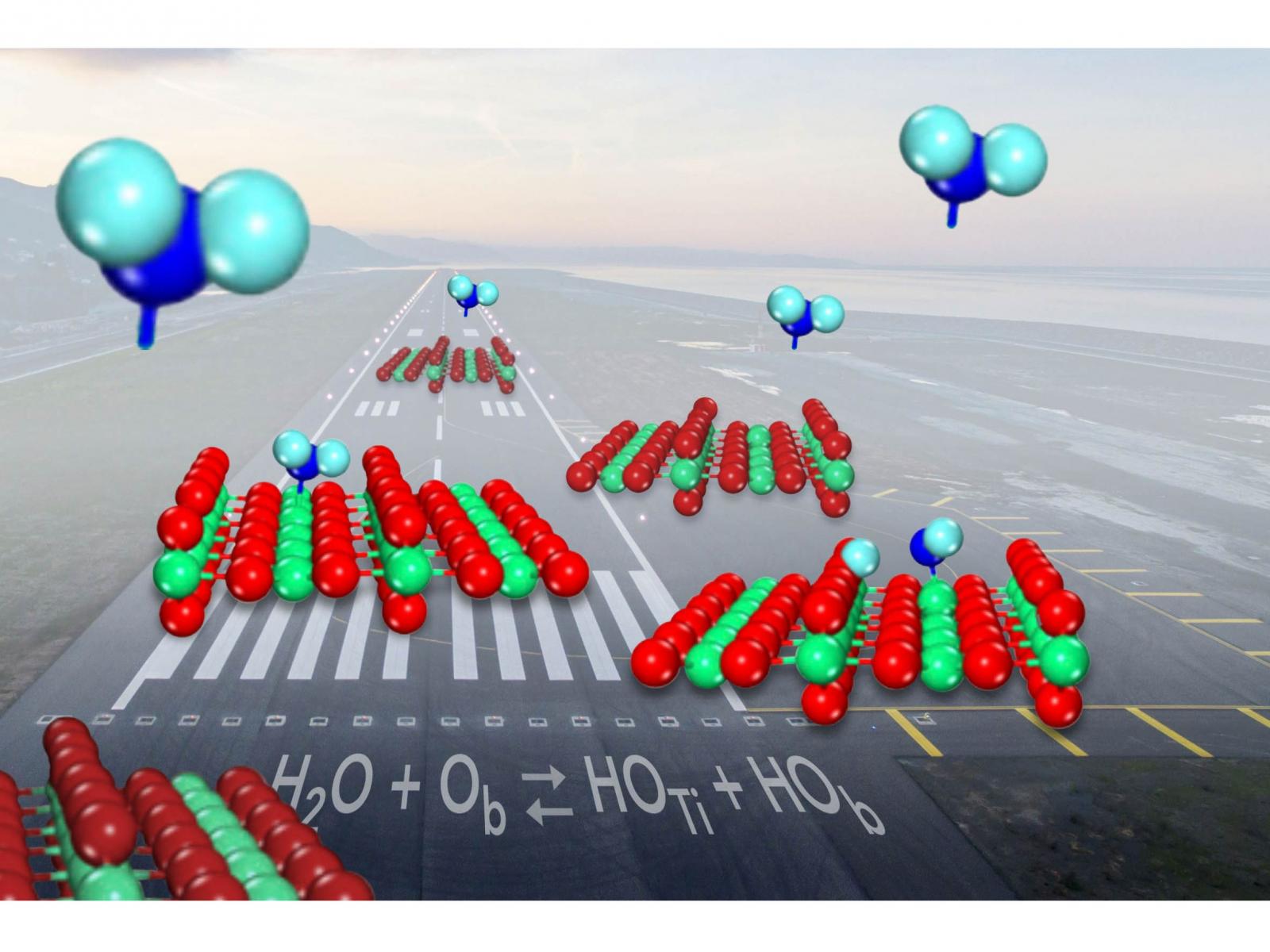 When water (shown in blue) comes in for a landing on the common catalyst titanium oxide (shown in red and green), it splits into hydroxyls (on leftward surface) just under half the time.

When a molecule of water comes in for a landing on the common catalyst titanium oxide, it sometimes breaks up and forms a pair of molecule fragments known as hydroxyls. But scientists had not been able to show how often the breakup happened. Now, researchers have determined that water is only slightly more likely to stay in one piece as it binds to the catalyst surface than it is to form the hydroxyl pairs.

The result — water's advantage is so small — might surprise some chemists. But understanding that small advantage has wide-ranging significance for a variety of potential applications in industries that use titanium dioxide. These industries include alternative fuel production, solar energy and food safety, and even self-cleaning windows. It will also help scientists better understand how acids behave and expand their knowledge of how molecules split.

"How water binds was the big question," said chemist Zdenek Dohnalek at the Department of Energy's Pacific Northwest National Laboratory. "Chemists had mixed information from a lot of different methods, and theorists also had ideas. Using a unique combination of instruments, we've finally solved it."

The team reported the work in the Proceedings of the National Academy of Sciences.

Even though many industries use titanium oxide to help speed up chemical reactions, scientists have not uncovered all of its secrets. A key mystery, researchers have long debated, is the way in which water interacts with titanium oxide. The interaction is important in its own right to split water, but it also influences the course of many reactions in general.

On titanium oxide's surface, molecules of water switch between being intact and splitting into hydroxyls. Even though there are many different ways of measuring the ratio of intact water to hydroxyls at any given time, scientists have not been able to nail it down for decades.

To explore the problem, PNNL researchers combined different tools in a new way. They sent beams of water at various speeds onto cold titanium oxide sitting under a very high resolution microscope known as a scanning tunneling microscope.

The microscope let them visualize the catalyst's titanium and oxygen atoms. The atoms appear as bright and dark rows, like a cornfield with tall rows of corn alternating with ditches, and individual molecules of water appear as bright spots that don't align with the rows.

In addition to viewing water molecules as they hit the surface, the team simulated details of the atoms interacting in exacting detail on a high performance computer. Combining experiments and simulations allowed the team to settle the long-standing debate.

Shaped like a V, a water molecule has a fat oxygen atom in the middle bound to two smaller hydrogen atoms on either side. Titanium oxide helps break the bonds between the atoms to push a chemical reaction forward: the titanium atoms trap water molecules, while nearby oxygen, also part of the catalyst surface, draws away then captures one of the hydrogen atoms.

When this happens, two hydroxyls are formed, one from a surface oxygen combining with the hydrogen and the other leftover from the water molecule.

The scientists needed to know how often the hydroxyls formed. Do water molecules largely stay intact on the surface? Or do they immediately convert to hydroxyls? How likely water will stay intact on titanium oxide — and how easily the hydroxyls reform into water — sets the stage for other chemical reactions.

To find out, the chemists had to develop technologies to measure how often the hydroxyls arose on the surface. Using resources developed within EMSL, the Environmental Molecular Sciences Laboratory, a DOE Office of Science User Facility at PNNL, they shot a beam of water molecules at a titanium oxide surface at low energy — the beam shooting slowly, and at high energy — moving fast like out of a firehose.

They ended up with bright spots on the surface, and the higher the energy, the more spots. But the spots did not look bright enough to include both hydroxyls, as expected, so they performed additional experiments to determine what the spots were.

The team shot water at the titanium dioxide surface and then froze the water in place. Then they slowly warmed everything up. Raising the temperature revealed the spots — which they thought were at least one hydroxyl — changing into water molecules. This meant that each spot had to actually be a pair of hydroxyls because the evidence showed that all the raw materials needed to make a water molecule were sitting there, and both hydroxyls were needed.

They performed various other experiments to determine the temperature at which a landing water molecule converts into hydroxyl pairs and vice versa. From that they learned that water is only slightly more stable than the hydroxyl pairs on the surface — 10 percent more, if we go by the amount of energy it takes to disrupt them.

Simulating the water landings on a high performance computer, also at EMSL, the researchers found out the only water molecules that stuck to the catalyst were ones that landed in a figurative ditch within a cornfield, where the water's oxygen faced a titanium atom down in the ditch.

If the water came in with just the right speed, the water reoriented and docked one of its hydrogens towards a nearby oxygen, forming the hydroxyl pairs seen in the experiments. If not, the water molecule just bounced off.

"We discovered that electrostatics — the same static that makes sparks when you rub your feet on the carpet — helped steer the water molecules onto the surface," said theoretical chemist and coauthor Roger Rousseau.

All of these details will help researchers understand catalysis better and improve our understanding of chemical reactions. In addition, the results reveal a value that scientists have long tried to nail down — how easy or hard it is for water to lose a hydrogen on titanium oxide.

This work was supported by the American Recovery and Reinvestment Act and the Department of Energy Office of Science.

Probing equilibrium of molecular and deprotonated water on TiO2(110)