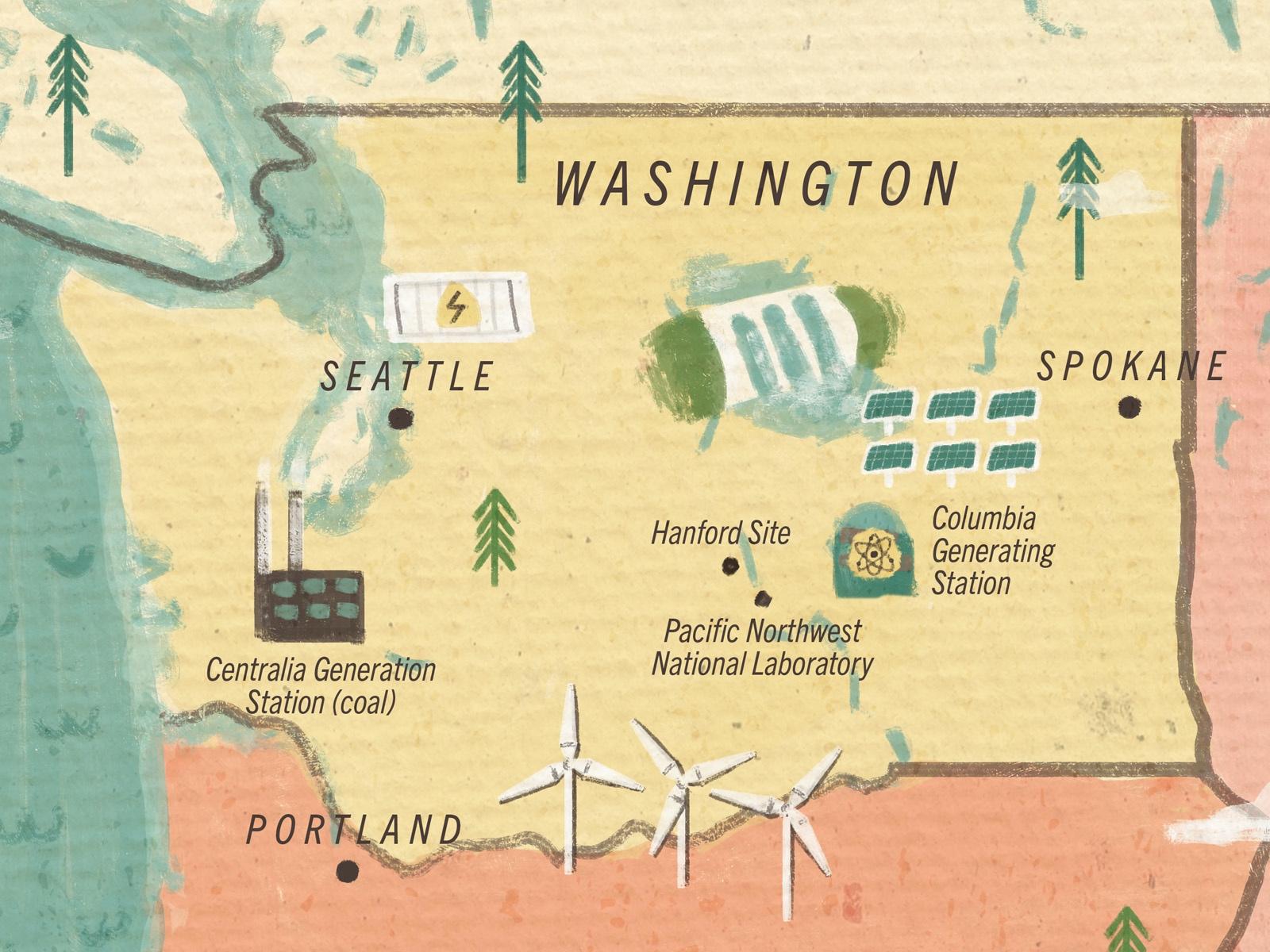 The technology could help fill a power source gap soon to be left by carbon-emitting resources like coal and natural gas, which will be phased out in coming years, according to a report composed by researchers at the U.S. Department of Energy’s Pacific Northwest National Laboratory and Massachusetts Institute of Technology.

“Nuclear energy is a reliable source of baseload electricity,” said PNNL’s manager for nuclear power systems Ali Zbib, who coauthored the report, “and our findings show that advanced small modular reactors could be economically competitive in a future carbon-free electricity sector. They’re well-suited to play an important role in an energy market that requires more flexibility.”

The report detailed how the new reactors could satisfy the Pacific Northwest’s dynamic electricity demand, assessed the region’s electricity market and explored the viability of deploying the reactors at three locations: at the Hanford Site, utilizing infrastructure from Energy Northwest’s partially completed power plants; at the slated to be closed, coal-fired Centralia Big Hanaford power plant in Western Washington; and on the Idaho National Laboratory site, where Utah Associated Municipal Power Systems plans to build the first NuScale light-water reactor.

The findings outline advantages of building at each site, from a trained workforce residing in Eastern Washington to infrastructure in place at the Centralia plant. The report focused on two designs: NuScale’s small modular reactor and GE Hitachi Nuclear Energy’s BWRX-300.

“Nuclear energy can help to decarbonize every sector of the economy,” said Jacopo Buongiorno, TEPCO professor of nuclear science and engineering at the Massachusetts Institute of Technology and co-author of the report. “The state of Washington is uniquely positioned to kick off this process by demonstrating the leading small modular reactor technologies well before the end of the decade, and that’s exciting.”

The Clean Energy Transformation Act was enacted in 2019, mandating that Washington’s power sources must generate electricity without emitting greenhouse gases by 2045. The law seeks carbon neutrality by 2030, with coal eliminated by 2025 and penalties for carbon-emitting sources imposed as soon as 2030.

More power will likely be needed in the future, said Zbib, as the state continues to electrify different sectors of its economy, including the transportation sector, and as the region’s population grows. Renewables in the form of wind and solar stand to fill some of the load. A complementary source of flexible power will be needed, however, to meet demand.

Enter small modular reactors, which are designed for flexible electricity generation. The designs discussed within the report employ water as a coolant, while other advanced designs employ gas or liquid metal coolants. The emissions-free technology has yet to be deployed in the United States, but designs have matured, including the two analyzed in this report.

The size and modularity of the reactors offer unique advantages, according to the report. Smaller cores, less radiological material and layered safety barriers built into small modular reactors result in evacuation zones miles smaller than those of conventional reactors.

Components of small modular reactors can be manufactured and assembled off-site, too, then shipped and installed on-site, cutting construction costs and trimming project timelines, said Zbib.

GEH’s design allows for multiple plants within a single site. NuScale’s design is scalable, in that modules can be incrementally added—up to a dozen per site. A four-module plant could meet demand for small regions, capable of powering nearly 200,000 homes, while a twelve-module reactor can power a large city.

The need for flexibility

Advanced small modular reactors are flexible—they can continuously operate at full power to provide baseload energy or can follow power swings on the grid. They could play a key role within a clean electricity generation system that includes nuclear, renewables and battery storage.

The report’s energy market assessment found that Washington’s electricity demand can significantly fluctuate on a monthly, daily and even five-minute basis. The average daily demand in February 2019, for example, varied by more than 2,100 megawatts, roughly equal to twice the output of Energy Northwest's Columbia Generating Station, the only commercial nuclear power plant in the Pacific Northwest.

Swings in electricity generated by some sources can drive the need for a power source that quickly adjusts, as well. The report details one 2009 case in which 700 megawatts of power surged onto the Bonneville Power Administration grid from five short minutes of strong winds. Utilities must ramp down output from flexible sources during such surges.

Taking one or more power modules offline, in the case of the NuScale power plant design, or adjusting reactor power could allow operators to quickly adjust to swings.

Building a plant at the Hanford Site, according to the report, could help cut costs in several ways. Much of the licensing and assessments that determine whether an area is fit for a nuclear power plant are already completed. Seismic risks and analyses of other vulnerabilities were carried out when the partially complete plants were built in the 1980s.

Nearly $140 million could be saved by using standing structures, according to a study described within the report, and the project schedule could be shortened, resulting in additional cost savings. And with Columbia Generating Station nearby, a trained workforce familiar with nuclear reactors offers another advantage.

The report finds that building at the Centralia plant, which will close all coal-fired boilers by 2025, has its own merits. Existing infrastructure can be harnessed, the facility is already connected to the grid and a new plant could replace jobs lost from the closure.

Building on the west side of the Cascade Mountains could reduce both transmission congestion and the need for transmission infrastructure to supply power to nearby high-demand areas like Seattle, Tacoma and Olympia.

With subsidies for clean energy and penalties for carbon-emitting resources in place, the report contends that plants at either location could provide competitively priced electricity.

“Decarbonizing the electric grid is essential in combating climate change,” said Zbib. While wind and solar will play a critical role, he added, phasing out carbon-emitting resources sparks the need for flexible, non-carbon-emitting sources. “Nuclear energy can be an integral part of a clean energy portfolio that will allow the state of Washington to meet its clean energy objectives.”

This research was funded by the Department of Energy’s Office of Nuclear Energy.