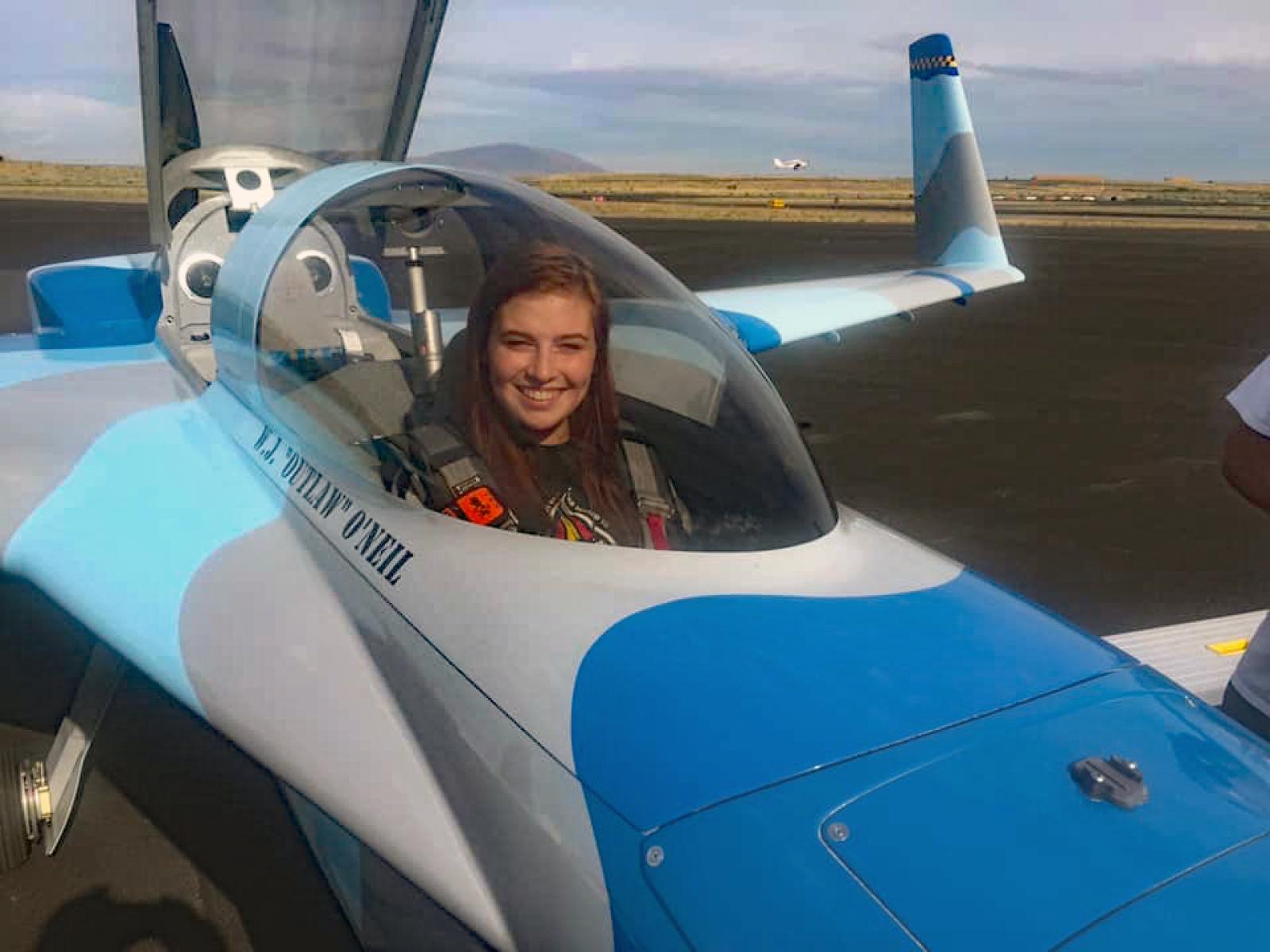 Alyssa in the cockpit while flying at the Richland Airport.

In eighth grade Alyssa Huntington had a choice to make: select between Spanish or technology as an elective. She had always been intrigued by technology, so she figured why not. Soon she was assisting with setting up the sound systems for school plays and assemblies, each time challenging herself to experiment with how lights could plug in and perform differently.

As her new hobby grew, so did her desire to challenge herself more. And that’s when she met Dan Sanner, a friend of her parents and a cybersecurity engineer at Pacific Northwest National Laboratory.

“I started working with Dan by helping on projects where he would challenge me with things like disassembling and reassembling a laptop or making a webcam automatically upload to YouTube for classrooms,” said Alyssa. “I didn’t care what I did, only how I could get more hands-on experience. After a few years, Dan asked me if I had ever thought about an internship at PNNL.”

PNNL offers a wide range of internships in science, technology, engineering, and mathematics (STEM). Interns work in offices and laboratories alongside experienced researchers to expand their knowledge and form mentoring relationships with the scientists, engineers, and business leaders.

“I can see a lot of myself in her back when I was her age. I wish I had known about internships and what PNNL did when I grew up here in the Tri-Cities many years ago,” said Dan. “We treat our interns just like another staff member, and it has been great to see Alyssa and the other high school interns keep up with college interns and staff as contributing members of projects.”

When Alyssa started as an intern, she volunteered to do anything and everything she could—each project allowed her to discover new interests.

“This internship has really helped narrow my career path,” said Alyssa. “That’s what I believe the internships are for. They give you a bunch of projects and then you narrow them down and see what you like to do. By doing this, you’ll find out if something is more of a career path or just a hobby.”

Alyssa’s work ethic and drive have led to a number of awards, including most recently being named one of 400 U.S. high school women recognized for their technological achievements by the National Center for Women & Information Technology (NCWIT) with the 2020 Honorable Mention NCWIT Award for Aspirations in Computing. Of 17 students honored from Washington State, Alyssa was one of only two from Eastern Washington.

A Leader by Example

Currently a senior at Delta High School in Pasco, WA, Alyssa has always been challenged by others to lead and show that being a girl hasn’t limited her in the technology field.  She owes a lot of that drive to two middle school teachers.

“In eighth grade, my technology teacher was on maternity leave so I had two teachers that school year who really pushed me,” said Alyssa. “Both of these amazing women told me ‘We have three girls in this technology class. What are you going to do to outdo all the guys?’ Not that I need to be better than the boys, but how can I make myself stand out.”

Alyssa took the advice to heart and began to look at how she could lead other girls, not just in school but within the community. Having been active in Girl Scouts most of her life, this seemed like a natural fit.

“I began to think about how I could help the girls in my troop think about what they can do with STEM,” said Alyssa. “I used STEM to teach them to look at problems in new ways and show them that girls can succeed in this field. Now they’re leading a variety of activities and growing in their own ways.”

During her freshman year, when no team for CyberPatriot existed at her school, Alyssa took it upon herself to form an all-girls team for the competition. CyberPatriot is a program created by the Air Force Association to inspire students toward careers in cybersecurity or other STEM disciplines. ​Teams compete each year in the National Youth Cyber Defense Competition, where they work through problems to secure virtual networks. Delta High School now has five teams and last year one team almost qualified for the national competition.

As one of her mentors, Dan has watched her not just transition into these leadership roles, but fully embrace them.

“Alyssa has grown immensely and taken on leadership roles incurring a steady barrage of nay-sayers because she’s a girl, but she’s done a great job by taking the higher road and has proven them wrong,” said Dan. “She is an ambassador for teens to pursue STEM and to not wait until college to do so.”

“The internship at PNNL is about more than just a resume and cover letter,” said Alyssa. “You have to show that you’re excited and that you have a passion. You never know where that passion will take you.”

For Alyssa, that passion took her to space, or at least the sky, as she tested herself by attending the NASA Space Camp Aviation Challenge and discovered a new passion: airplanes.

“I love airplanes!” said Alyssa with a smile. “After that camp, I started to look at what I’ve learned at PNNL and how I could apply that to my new aviation goals. Dan helped me think about this and where I could go.”

One direction she is considering is working with drones and how this technology will require new cybersecurity as more companies produce them and even start using drones for deliveries.

“We love seeing when students go beyond the textbook and find solutions to problems using technology,” said Dan. “Alyssa’s story is one that inspires kids to consider themselves capable of a STEM internship at PNNL.”

In the fall, Alyssa will begin the aviation mechanics program at Big Bend Community College in Moses Lake, WA, and she has also started working toward earning her pilot’s license.

“I know at some point I won’t be able to combine all of my passions into one career,” said Alyssa.

But for right now, the sky’s the limit.