Mentoring the Next Generation of Marine Researchers 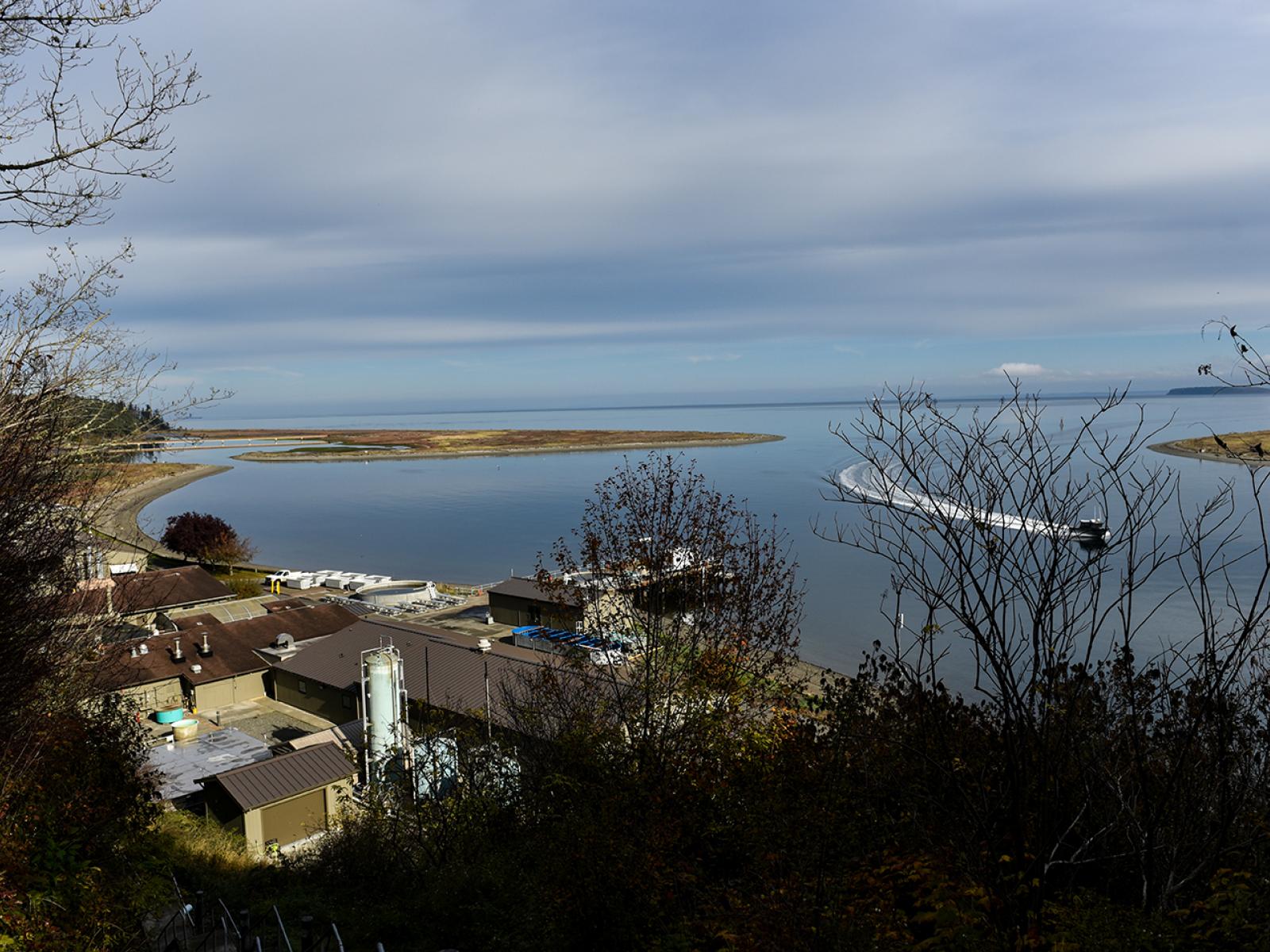 The PNNL-Sequim campus, in Sequim, Washington, is focused on helping the nation achieve sustainable energy, a sustaining environment, and coastal security. University of Washington students have worked with PNNL mentors on two projects related to the marine laboratory’s mission.

Marine scientist Andrea Copping knows the importance of the next generation of potential Pacific Northwest National Laboratory (PNNL) scientists and engineers. So instead of waiting for them to find PNNL, Copping recently went to them.

Copping, project manager and senior researcher at the PNNL-Sequim campus in Washington, represented PNNL last fall at an introductory event for the University of Washington’s (UW) College of Engineering Industry Capstone Program. The program brings together UW students and potential internship employers to tackle real-world, multidisciplinary engineering problems. Internship employers bring in projects and provide support to teams of engineering students who design and build projects.

“Some of us at PNNL-Sequim decided it would be valuable to collaborate with colleges and universities,” said Copping. “We wanted to bring more students in, to get more students in the pipeline to becoming marine engineers and marine scientists. We have collaborations with other Northwest universities, including Oregon State and Washington State, but UW’s Capstone Program provided a convenient, nearby fit for us to launch this mentorship effort.”

Nine UW students chose to participate in two PNNL-Sequim projects. Since January, one team of students has sought to improve the energy efficiency of underwater robotic, data-collecting devices used worldwide in oceans. Another team has explored developing a system that would support and deploy an energy-harvesting device to power research instruments in the Arctic.

“I enjoy interacting with these young, bright research engineers,” said Deng. “It’s really important for us to reach out and develop our next-generation workforce as part of our recruiting pipeline.”

Cavagnaro agreed. “We want to inspire students and get them thinking about these hard problems and finding solutions,” said Cavagnaro. “They're learning a lot of new concepts that they didn't necessarily learn in class.”

Deng meets weekly on a video call with four mechanical engineering students for up to an hour. In a typical session, the students report their progress on the assigned task, discuss project challenges, and seek Deng’s guidance.

“And then we discuss what's the next step for next week,” said Deng, “and we calibrate our progress against the overall goal and our remaining time.”

Deng’s own research inspired the student project. He is the senior author of a study published this spring in Renewable and Sustainable Energy Reviews that examines the potential and limitations for powering undersea, data-collecting robots with changes in ocean temperatures and salinity.

The robots would perform functions similar to other unmanned research floats in the ocean that already collect information on temperature, salinity, pressure, and biogeochemical components such as oxygen, pH, nitrates, and chlorophyll from the world’s oceans.

“Those floats are highly valuable in providing information about the world’s oceans,” said Deng. “But once the battery inside dies, those floats stop working. We want to find a way to extend the service life of the floats.”

The UW undergraduates are not expected to find that solution by June, the end of the academic quarter that they spend with Deng. However, the students’ research will provide fresh thinking and a feasibility study for improved design, while Deng offers real-world advice.

Energy below the ice

Batteries power several types of information-gathering systems for Arctic-based research projects. Replacing the batteries can be a time-consuming, resource-depleting process.

Cavagnaro has guided five UW students in the early stages of developing an energy-generating system to power sensors beyond what could be accomplished by a battery alone. The project envisions a device that can be placed below the Arctic ice surface and harvest energy from the water flow beneath the ice. The device would deliver electricity to an on-ice research instrument.

“The team has explored how you deploy this system,” said Cavagnaro.

The students’ first task was determining the best method to deploy the energy-gathering system. They looked at two options: boring a hole in the ice, which is typically 1 to 3 meters thick, or whether it would be more energy efficient to use a heated probe.

“They had to figure out how much energy it would take to make a hole of a certain size through a certain thickness of ice,” Cavagnaro said, “and they had to make that estimation for mechanical systems and for thermal systems.”

The students declared the heated probe the winner.

“One of the key factors they found is the randomness of the ice surface,” Cavagnaro said. “If the ice surface is thicker than expected, the mechanical drill might not be long enough. That could be resolved with developing a way of moving the drill down the hole, but that would take more energy. The students found a melting device would be more efficient.”

Cavagnaro has also met weekly with the students by video call. He hopes they can visit PNNL-Sequim before the end of the quarter.

Cavagnaro helped lead the effort to launch the mentoring program, in part because he fondly remembers his own undergraduate industry-driven capstone project while at Carnegie Mellon University, working with the Westinghouse Corp.

“I wanted that experience of mentorship,” Cavagnaro said, “and helping guide new engineers.”

New kid on the block

PNNL is a newcomer to UW’s College of Engineering Industry Capstone Program, which is accustomed to Seattle-area companies such as Boeing, Amazon, and Alaska Airlines. PNNL has been a welcome addition, said Eli Patten, a UW mechanical engineering assistant teaching professor who has served as the faculty advisor for the two projects.

“It’s been great to have a partnership with PNNL because it complements the typical capstone projects we offer with industrial companies,” said Patten. “Most students aren’t aware of the engineering career opportunities in national labs like PNNL. The students have been challenged in both projects to learn new engineering concepts and develop creative solutions that could enable more effective climate research.”

This marked the first time that PNNL has partnered with a university for a mentorship collaboration such as Capstone. Copping said this initial experience has gone so well that PNNL would be interested in participating again.

“Oh, absolutely,” said Copping. “We would also be interested in collaborating with graduate students. Working with other universities in the Northwest, such as Oregon State and their marine science program, would also be appealing.”

That effort seeks to understand the power requirements of emerging coastal and maritime markets and advance technologies that could integrate marine renewable energy to relieve these power constraints and enable sustainable growth of the blue economy.

The Water Power Technologies Office has provided the funding for PNNL's participation with UW’s Capstone Program.

“We have a research institution fully capable of providing a meaningful contribution to these students’ career development,” said Copping. “But perhaps more importantly, we have staff members who are genuinely interested in helping these students learn.”