Longstanding Nuclear Safeguards Project Wraps up with a System Sendoff 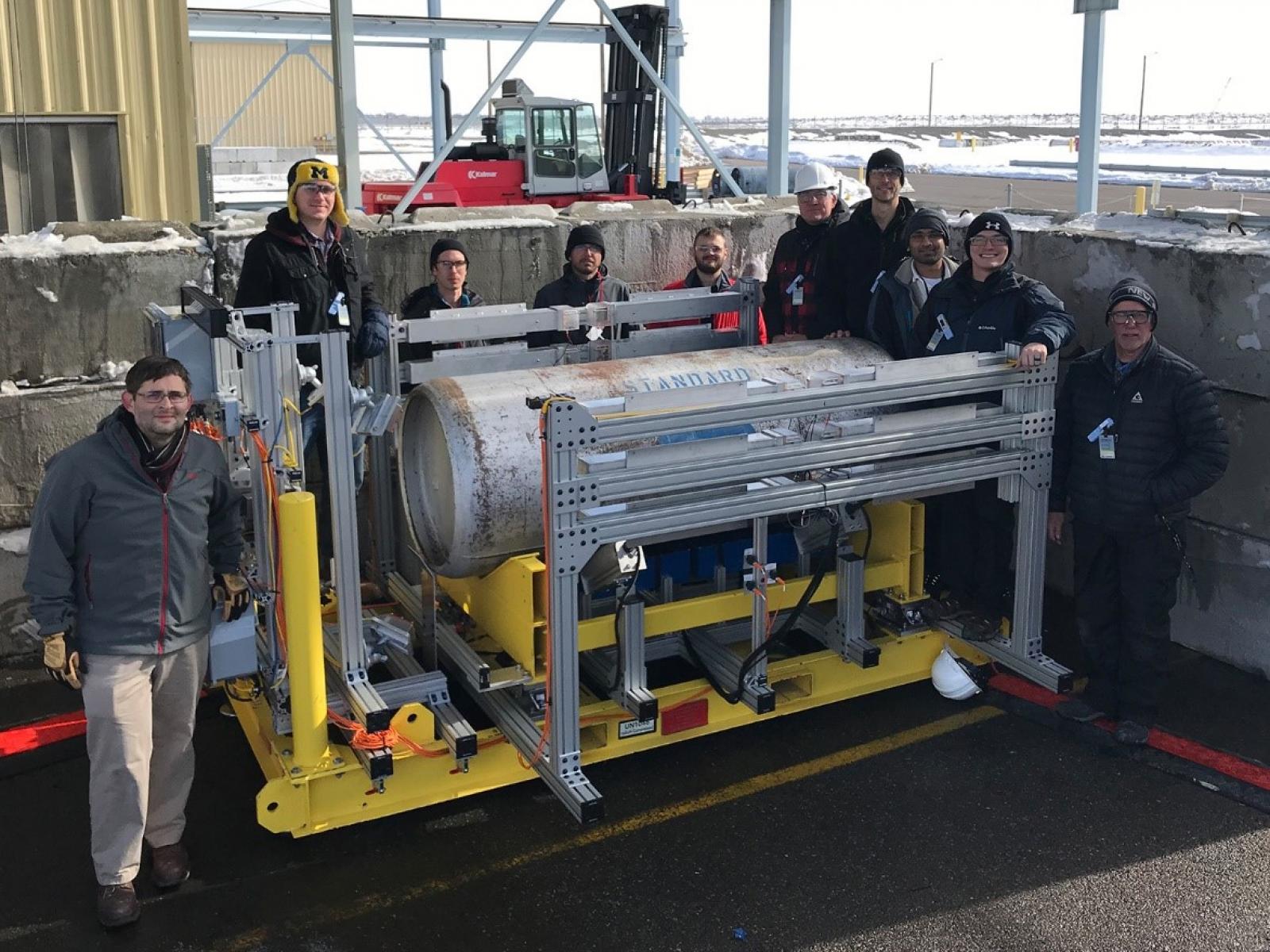 In this February 2019 photo from pre-pandemic times, collaborators from Los Alamos, Oak Ridge, and Pacific Northwest National Laboratories met during a field trial of a UCVS prototype at Framatome in Richland, Washington.

This summer, a team of nuclear engineers, physicists, data scientists, mechanical engineers, millwrights, technicians, and managers gathered to bid farewell to a nuclear safeguards system that has been under development and testing for nearly 13 years. Later this year, the prototype Unattended Cylinder Verification Station (UCVS), developed to support the International Atomic Energy Agency (IAEA), will be packed in a shipping container and leave Pacific Northwest National Laboratory (PNNL) for further testing in Vienna, Austria.

The UCVS is a first-of-a-kind automated system to provide an independent measurement of the uranium enrichment, uranium-235 mass, and total weight of uranium hexafluoride (UF₆) cylinders used in gas centrifuge enrichment plants and other UF₆ facilities around the world. The concept of an unattended system for verifying UF₆ cylinders was first published by the IAEA in 2007, as one potential element in advanced safeguards approaches for uranium enrichment facilities. New technologies, such as the UCVS, would help the IAEA deter the proliferation of nuclear weapons by providing credible information that countries are honoring their safeguards obligations.

Eric Smith, the principal investigator of the PNNL project, described how UCVS got its start, “PNNL and LANL matured the nondestructive assay methods in parallel through their respective LDRD projects until 2010, when both organizations proposed further development and testing to the National Nuclear Security Administration (NNSA) Office of International Nuclear Safeguards. The NNSA projects proved that these methods could assay the entire volume of the cylinder and accurately quantify uranium enrichment and total uranium mass.”

In 2013, NNSA’s investments in cylinder-assay technologies at PNNL, LANL, and Oak Ridge National Laboratory (ORNL) were merged into a single U.S. Support Project sponsored by the U.S. State Department, with PNNL as project lead. Under this sponsorship, UCVS evolved to use the LANL neutron detection system, the PNNL gamma-ray detection system, and an ORNL-developed occupancy system to identify and weigh the cylinders. Savannah River National Laboratory facilitated one of the early field trials at a commercial fuel fabrication facility in South Carolina. Several additional field trials were conducted at a fuel fabrication facility in Washington State. The development team used the findings from each field trial to improve measurement methods and mechanical structure design for the next trial. Over the course of the UCVS project, more than 40 staff members from across PNNL, LANL, and ORNL made significant contributions to UCVS.

In 2020, external factors led to a cancellation of a comprehensive final field trial planned in the United States. That cancellation, coupled with evolving requirements from the IAEA, required a significant round of adaptations to the UCVS prototype, primarily in the design of the mechanical support structures. In the last year, PNNL welders, millwrights, and technicians worked alongside mechanical engineers to make sure the UCVS could house the sensitive detections systems and be robust enough for use in an industrial environment—supporting the weight of the UF₆ cylinders it measures. The largest cylinders are more than 13 feet long, 4 feet in diameter, and weigh about as much as six pickup trucks (more than 32,000 pounds). Physicists made sure the individual detection systems were working properly and the technicians focused on integrating all detection systems. A limited set of testing, focused primarily on the mechanical integrity of the frame and precision of the weighing systems, took place at PNNL during May and June.

“Once we wrote a plan to capture the scope of work that included addressing pandemic work restrictions and remote support from our collaborators, PNNL was able to set up a secure remote network for LANL and ORNL. We were then able to hold meetings and working sessions with LANL and ORNL participating virtually to install and test their equipment on the UCVS in Richland,” said Mital Zalavadia, UCVS project manager. “UCVS is now ready for further testing and field trials by the IAEA.”