Hydrogen Energy Storage at Your Service 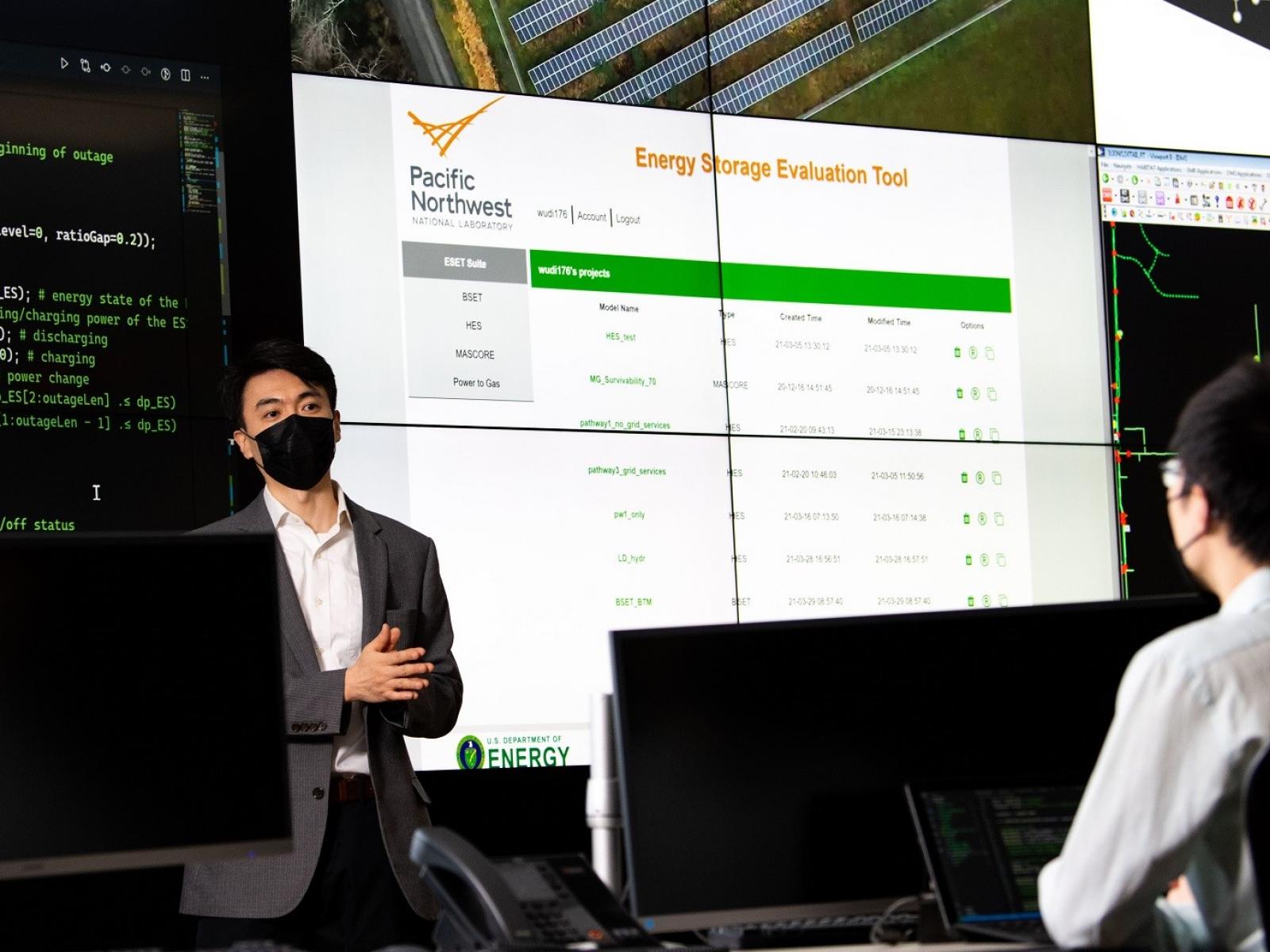 For most people considering any large purchase, cost is a major consideration. But cost is balanced by value. What do they get out of the investment over the long haul? Is it worth it?

The Energy Storage Evaluation Tool (ESET) is a suite of modules and applications that utilities, regulators, vendors, and researchers can use to model, optimize, and evaluate various energy storage systems: hydrogen, pumped storage hydropower, microgrids, batteries, and thermal mass stored in buildings. The tool examines a broad range of use cases and grid applications to maximize energy storage system benefits from stacked value streams—multiple uses at the same time.

Hydrogen energy storage is the latest addition to the modeling suite, and it brings a unique capability to the tool.

Hydrogen energy storage starts with an electrolyzer, a unit that uses electricity to split water into hydrogen and oxygen. The hydrogen can be used as an alternative to carbon-intensive fossil fuels, feedstock in chemical and processing industries, and heat and power generation through a gas network or on-site fuel cell.

The new ESET module for hydrogen, called HESET, can model these different pathways and calculate economic benefits from revenue and cost savings. The tool can stack different revenue streams to show their cumulative effect, including grid services (such as frequency regulation, capacity value, deferral of transmission or distribution equipment upgrades, demand charge reductions, and demand response) along with demands for hydrogen (such as in industrial, blending, and fueling applications).

“Other energy storage evaluation tools are out there. This tool is unique in that it allows for modeling of stacked revenue streams, like grid services and several different hydrogen end uses,” said Di Wu, chief research engineer in PNNL’s Controls and Optimization group.

Wu, an expert in power system operations and planning, led the effort to build the intricate models for individual system components, different hydrogen flow pathways, various grid and end-user services, and multidimensional couplings. He said the key differences between hydrogen energy storage and other storage options are its ability to interact with multiple sectors and its relatively low cost per volume for long-term storage.

PNNL used HESET to evaluate the economic performance of a hydrogen energy storage system with a 1–10 MW electrolyzer, different system configurations, hydrogen pathways, and grid services. The team found that the hydrogen energy storage project can be financially viable, yielding up to 1.5 times return on investment when the system is properly sized and optimally dispatched to maximize stacked value streams.

To make sure no double counting of the potential benefits occurs, HESET uses a “co-optimization” strategy, which encompasses the following:

The U.S. Department of Energy (DOE) Office of Electricity, Energy Storage program, sponsored development of the original evaluation tool in 2013, starting with batteries and then storage-enabled microgrids and hydrogen energy storage. The earlier version of ESET for battery storage has been licensed by 50 utilities, consultants, and vendors. The enhanced web-based ESET, launched about 8 months ago, has more than 50 non-PNNL users.

The updated hydrogen module, including fuel cells and additional grid services, was completed through a project funded by the DOE Office of Energy Efficiency and Renewable Energy (EERE), Hydrogen and Fuel Cell Technologies Office. The project supports EERE’s H2@Scale vision for clean hydrogen across multiple applications, including energy storage. The effort also aligns with DOE’s commitment to address the climate crisis through clean, next-generation energy options that can accelerate the path toward meeting DOE’s goals of 100 percent clean electricity by 2035 and net-zero carbon emissions by 2050.

In addition to Wu, primary developers of HESET include PNNL researchers Dexin Wang, Thiagarajan Ramachandran, and Sen Huang, with contributions from Patrick Balducci (formerly with PNNL), Vanshika Fotedar, and Allison Campbell. Industry collaborators included Callum Smith of ITM Power in the United Kingdom, and Brian Beauregard of Holyoke Gas and Electric in Massachusetts.

PNNL developed ESET to evaluate dozens of energy storage systems across the United States.  A subset of ESET’s features and capabilities are now publicly accessible as a web-based tool that can be used across a variety of platforms and devices.

The tool’s modular structure eases maintenance and expansion, while the encapsulated environment supports portability, version control, and component reuse. Separation of the data and applications improves security, and the user-friendly graphic interface allows for easy configuration and data inputs.

PNNL researchers are currently working with Standard Hydrogen Corporation to adapt the tool for customized analysis. The New York-based company is developing a network of distributed-scale, on-site hydrogen production and distribution facilities called Energy Transfer Systems. The company is using ESET to help inform engineering designs for their systems, identify the most-promising near-term use cases for deployment of stations, elucidate the pros and cons of the various stations in different use cases, and accelerate improvements to system performance toward the ultimate goal of broad deployment of a network of Energy Transfer Systems.

“These analyses are highly important to deploying our Energy Transfer System platform as a supplement to other energy storage and demand-side resources,” said Paul Mutolo, chief executive officer for Standard Hydrogen Corporation. “Deployment of infrastructure like our Energy Transfer Systems is critical to reaching the nation’s clean energy and emissions reduction targets.”