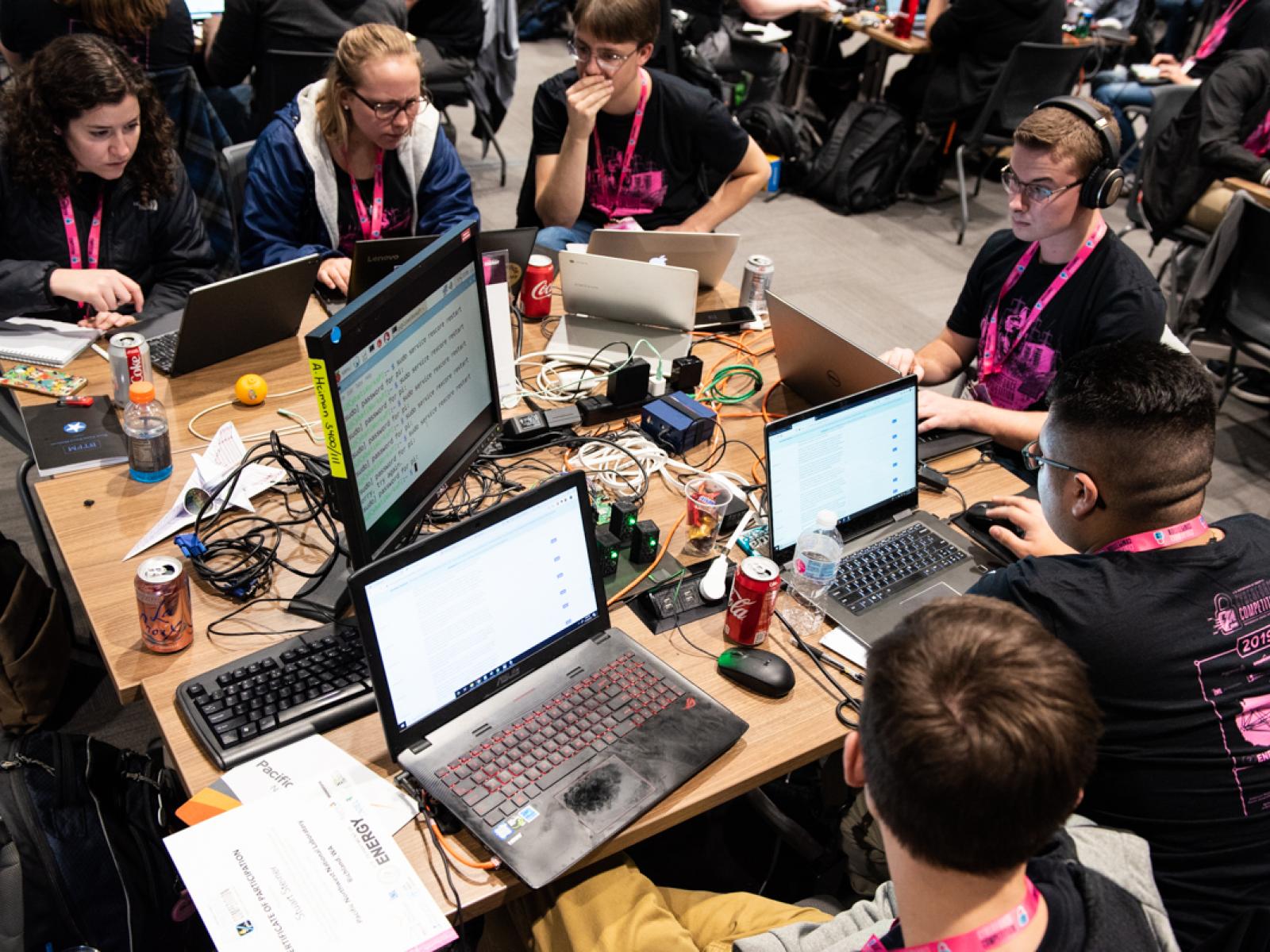 Fueled by caffeine and snacks, members of Eastern Washington University’s team work together to thwart a sophisticated cyberattack on critical energy infrastructure during the 2019 CyberForce Competition at PNNL.

Seventeen teams from colleges and universities throughout the Pacific Northwest converged on the PNNL campus Nov. 16 to put their cyber skills to the test. The event was the U.S. Department of Energy’s (DOE’s) fifth CyberForce Competition™. The event, held simultaneously at 10 DOE national laboratories across the country, challenged 105 college teams and more than 500 students to defend a simulated energy infrastructure from sophisticated cyberattacks.

“CyberForce brings teams together to protect against tomorrow’s threats, a uniquely American approach to problem solving. Congratulations to this year’s winners and a big thanks to all the bright students who participated.” - Energy Secretary Rick Perry

“As we modernize our grid, new challenges arise. Achieving a balance of system security and system usability is at the heart of your challenge tomorrow, and our challenge as a nation,” PNNL Laboratory Director Steve Ashby told participating students in his welcoming remarks at CyberForce 2019. “Our ability to successfully tackle this challenge requires that we cultivate a highly skilled cybersecurity workforce. We hope competitions such as this help inspire the students here today, and those across the country, to serve as our next generation of cyber practitioners.”

The CyberForce Competition is designed to inspire and develop the next generation of energy sector cybersecurity professionals by giving them a chance to hone their skills during realistic interactive scenarios.

During the competition, teams competed to defend their simulated infrastructure from cyberattacks by adversarial “red teams,” played by industry professionals, while maintaining service for their “green team” customers, played by volunteers.

This year’s competition challenged teams to defend one of four scenarios—an energy company’s solar generation facility, electric substation, high performance computing center, or manufacturing plant—while communicating with the other three infrastructures to monitor and maintain the integrity of the system as a whole. Each team was scored on its ability to safeguard against attacks while maintaining system usability.

The competition is co-funded by the DOE’s Office of Cybersecurity, Energy Security, and Emergency Response (CESER); Office of Electricity; Office of Science; Office of the Chief Information Officer; Office of Energy Efficiency & Renewable Energy; and the National Nuclear Security Administration.

“Every year, the CyberForce Competition attracts more and more talented students,” said Karen S. Evans, assistant secretary for DOE CESER, “and with the expansion to address professional recruitment, the competition will only continue to grow. We envision this competition to be a tool to assist our sector to close skills gaps and shortage of cybersecurity experts.”

For more information about the competition, visit https://cyberforcecompetition.com/.