From Breakfast to Biocrude: Study Identifies Production Potential across Nation 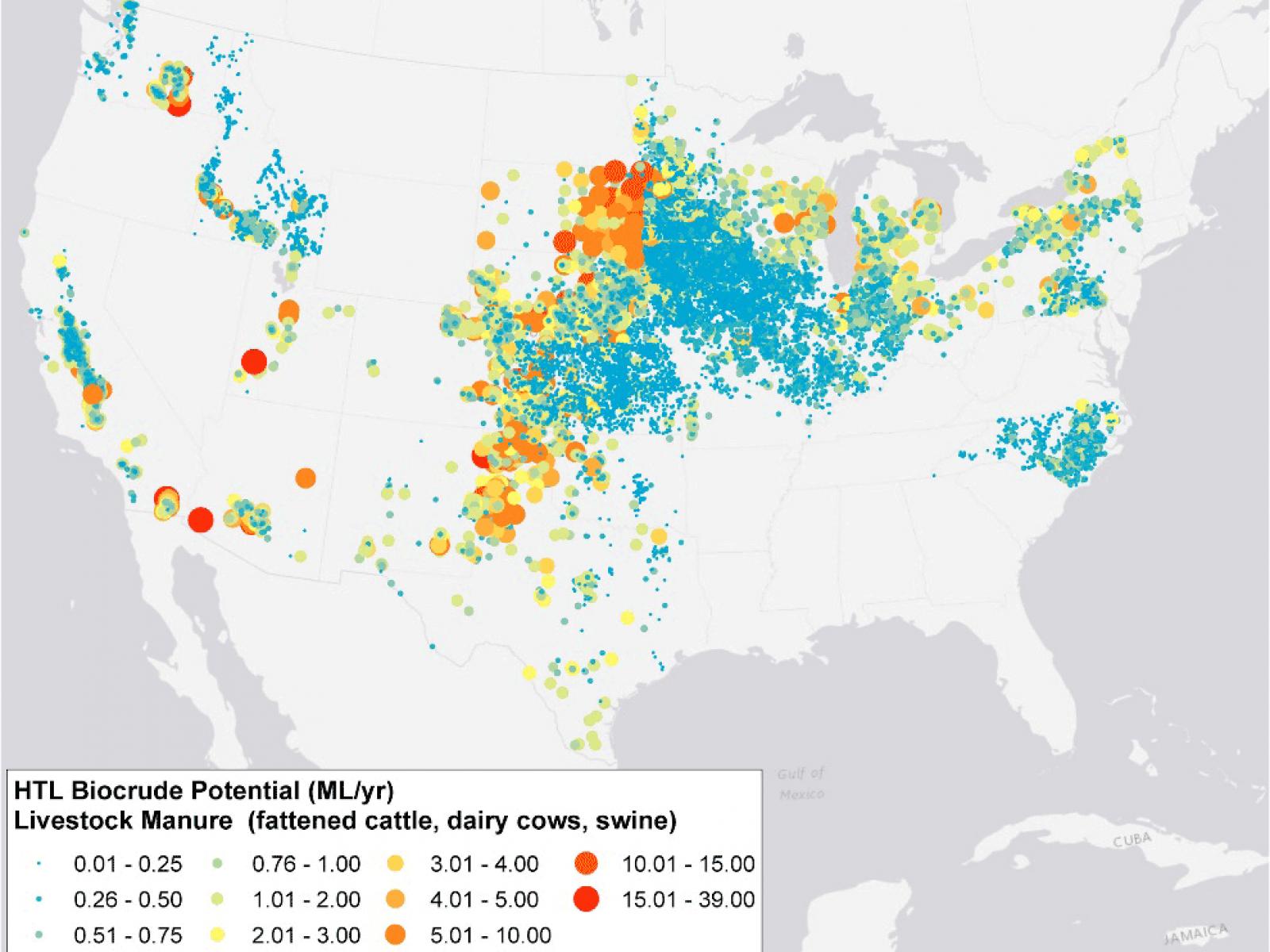 In their study, the research team discovered that animal manure showed the potential for 2.7 billion gallons of biocrude per year, with the greatest concentration found in the Midwest and Great Lakes.

Cattle waste and wastewater. Sludgy grease ensconced in restaurant and cafeteria grease traps. Food waste—uneaten leftovers or culinary mistakes. Contrary to the lyrics in The Sound of Music, these aren’t a few of our favorite things.

But when paired with waste-to-energy (WtE) technology, these things can become downright energetic—in the form of biofuels. These organic wastes serve as potential biofuel feedstocks, and they are available just about anywhere across the nation. However, industry lacks information about the locations of greatest concentration so it can boost biofuel production while giving human health and the environment a helping hand.

To shed light on this uncertainty, a team of researchers from Pacific Northwest National Laboratory and National Renewable Energy Laboratory performed a detailed analysis of these wastes’ potential for biofuel production on a site-specific basis across the conterminous United States.

The results of the team’s analysis were published in Renewable and Sustainable Energy Reviews.

These organic wastes can pack a punch to health and the environment.

Wastewater sludge is costly to treat and dispose because of its significant volume and pollutants, such as pharmaceuticals. Livestock production is shifting towards fewer but much larger operations, resulting in quantities of manure that exceed local demand for fertilizer. Food waste placed in the landfill produces large amounts of methane, an environment-harming greenhouse gas. And fats, oils, and grease deposited in sewer pipes can hinder wastewater flow to treatment plants, or harm fish and other organisms if they reach the ocean.

Instead of walloping the environment, WtE technologies can divert these wastes for beneficial energy use. The research team selected one WtE technology—hydrothermal liquefaction, or HTL—for their analysis.

HTL mimics the geological conditions the Earth uses to create crude oil, using high pressure and temperature to achieve in minutes what has typically taken millions of years. The resulting material is similar to petroleum pumped out of the ground, but also contains small amounts of water and oxygen. PNNL has demonstrated that biocrudes from wastewater sludge, algae, and a few other wet wastes can be refined using conventional petroleum refining operations.

The technique has a number of advantages over other thermochemical conversion methods. It works best with wet biomass. It has the ability to transform almost all of the biomass into biocrude oil. It also offers opportunities to recover nutrients such as phosphorous.

Results: Potential Biocrude across the Nation

Results indicate that for the conterminous United States, on average, as much as 5.9 billion gallons of biocrude oil could be produced each year.

The team discovered that the potential for biocrude oil generated by sludge sourced from publicly owned treatment works is 1.1 billion gallons per year. This resource was found to be widely distributed throughout the country—with a high density of sites in the eastern half of the United States and larger individual sites located in the biggest cities.

Animal manure showed the potential for 2.7 billion gallons of biocrude per year. The team found the Midwest and Great Lakes region to have the highest resource availability, with a large quantity of smaller individual sites throughout Ohio, Indiana, Illinois, Iowa, and Missouri, and several large concentrated animal feeding operations in Michigan, Wisconsin, South Dakota, Nebraska, Kansas, Oklahoma, and Texas. Concentrations of this resource are significant also in California, Washington, Idaho, Utah, and southern Arizona, with resource availability shown as well in North Carolina, Pennsylvania, and New York.

Food waste—much like wastewater sludge—was found to follow population patterns. High-density populations such as Los Angeles, Seattle, Las Vegas, New York, Phoenix and others showed high resource availability and thus high potential for biocrude oil production. This waste is estimated to produce .9 billion gallons per year—but it also had the lowest conversion rate out of the assessed feedstocks.

Fats, oils and grease were also found to be well distributed throughout the nation, with higher density in the eastern half of the United States. With a high HTL conversion rate, the research team estimated this waste can provide 1.16 billion gallons of biocrude oil per year.

These findings provide a foundation for a robust WtE industry to capitalize on underused organic wastes for biofuels production.

Following this preliminary effort, the research team will seek additional information in the future, including major logistical and scaling challenges and tradeoffs for acquiring and preprocessing individual and blended feedstocks for conversion, as well as cost-benefit tradeoffs.

The research is supported by DOE’s Office of Energy Efficiency and Renewable Energy.