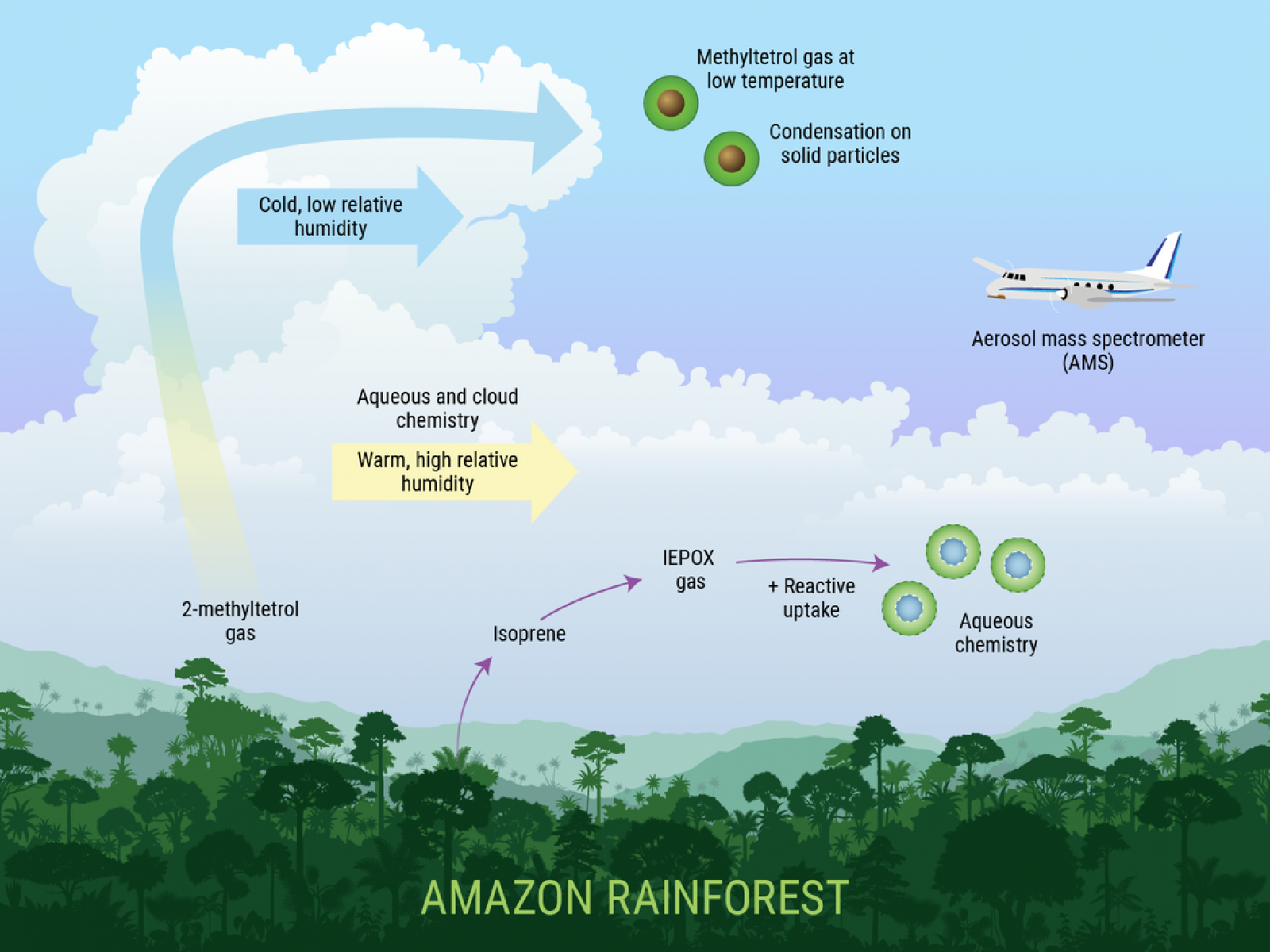 PNNL Earth scientist Manish Shrivastava and his team identified an atmospheric process that creates a type of fine particle over the Amazon rainforest. Through the process, semi-volatile gases, which are natural carbon-based chemical compounds that can easily condense to form fine particles in the upper atmosphere, are emitted throughout the Amazon rainforest by previously unrecognized in-plant and surface chemistry processes.

Plant-foliage-derived gases drive a previously unknown atmospheric phenomenon over the Amazon rainforest, according to a recent study by researchers at Pacific Northwest National Laboratory (PNNL).

The findings have important applications for atmospheric science and for climate change modeling.

“The tropical Amazon rainforest constitutes the lungs of the Earth, and this study connects natural processes in the forest to aerosols, clouds, and the Earth’s radiative balance in ways that have not been previously recognized,” said Manish Shrivastava, Earth scientist at PNNL and principal investigator of the study.

The findings were recently published in ACS Earth and Space Chemistry.

Shrivastava and his team were studying fine particles in the upper atmosphere when they discovered a large disparity between their measurements and what would have been expected based on current understanding in atmospheric models. Through further study, the team found that there were key forest–atmosphere interactions missing from current atmospheric models that govern the amount of fine particles in the upper atmosphere.

The researchers discovered a previously unrecognized process involving semi-volatile gases that are emitted by plants throughout the Amazon rainforest and transported into the upper atmosphere by clouds. These gases are natural carbon-based chemical compounds that can easily condense to form fine particles in the upper atmosphere. This process, Shrivastava said, is very efficient at producing fine particles at high altitudes and cold temperatures. These fine particles cool the planet by reducing the amount of sunlight reaching the Earth, and they also seed clouds that affect precipitation and the water cycle.

“Without a full understanding of the semi-volatile source of organic gases, we simply cannot explain the presence and role of key particle components at high altitudes,” Shrivastava said.

IEPOX-SOAs are essential building blocks for fine particles found at all altitudes of the troposphere—the region of the atmosphere extending from the Earth’s surface to approximately 20 kilometers in altitude above tropical regions. However, atmospheric models did not sufficiently account for these particles and their influence on clouds high above the Earth.

“As models wouldn’t predict the observed IEPOX-SOA loadings at 10-to-14-kilometer altitudes in the Amazon, we were getting what I believed to be either model failures or a lack of understanding of the measurements,” Shrivastava said. “I could explain it at the surface but couldn’t explain it at higher altitudes.”

Shrivastava and his team scoured data collected by the Grumman Gulfstream-159 (G-1) aircraft, a DOE flying laboratory operated by the Atmospheric Radiation Measurement (ARM) Aerial Facility, which was flown up to 5 kilometers in altitude. The team also compared data collected by a German aircraft known as the High Altitude and Long Range Research Aircraft, or HALO, which is flown at altitudes reaching 14 kilometers. Based on the modeled projections, their loadings of IEPOX-SOAs should have been at least an order of magnitude lower than what was measured, Shrivastava said. Neither he, nor his colleagues outside of PNNL, could explain the disparity in measurements and what the models projected.

Before the team’s research, it was believed that IEPOX-SOAs were formed primarily by multiphase atmospheric chemistry pathways involving reactions of isoprene in the gas phase and particles containing liquid water. However, the atmospheric chemistry pathways required to create IEPOX-SOAs do not occur in the upper troposphere because of its extremely cold temperatures and dry conditions. At that altitude, the particles and clouds are frozen and lack liquid water. Researchers therefore could not explain their formation observed at 10 to 14 kilometers in altitude using available models.

To unravel the mystery, the researchers combined specialized high-altitude aircraft measurements and detailed regional model simulations conducted using supercomputing resources at the Environmental Molecular Sciences Laboratory at PNNL. Their study revealed the undiscovered component of atmospheric processes. A semi-volatile gas known as 2-methyltetrol is transported by cloud updrafts into the cold upper troposphere. The gas then condenses to form particles that are detected as IEPOX-SOAs by the aircraft.

“This is certainly an important discovery because it aids in our understanding of how these fine particles are formed, and therefore shines a new light on how natural processes in the forest cool the planet and contribute to clouds and precipitation,” Shrivastava said. “Along with a changing global climate and rapid deforestation in many parts of the Amazon, humans are perturbing the key natural processes that make fine particles in the atmosphere and modulate global warming.”

The team’s finding only scratches the surface, Shrivastava said, in learning about this newfound atmospheric process and how it affects the formation of fine particles in the atmosphere. He said the newly identified process from plants could explain a broad array of atmospheric particle phenomena over other forested locations across the world.

“In the grand scheme, this is just the beginning of what we know and will open new frontiers of research in land–atmosphere–aerosol–cloud interactions,” he said. “Understanding how the forest produces these particles could help us understand how deforestation and changing climate will affect global warming and the water cycle.”