No Catalyst Is an Island 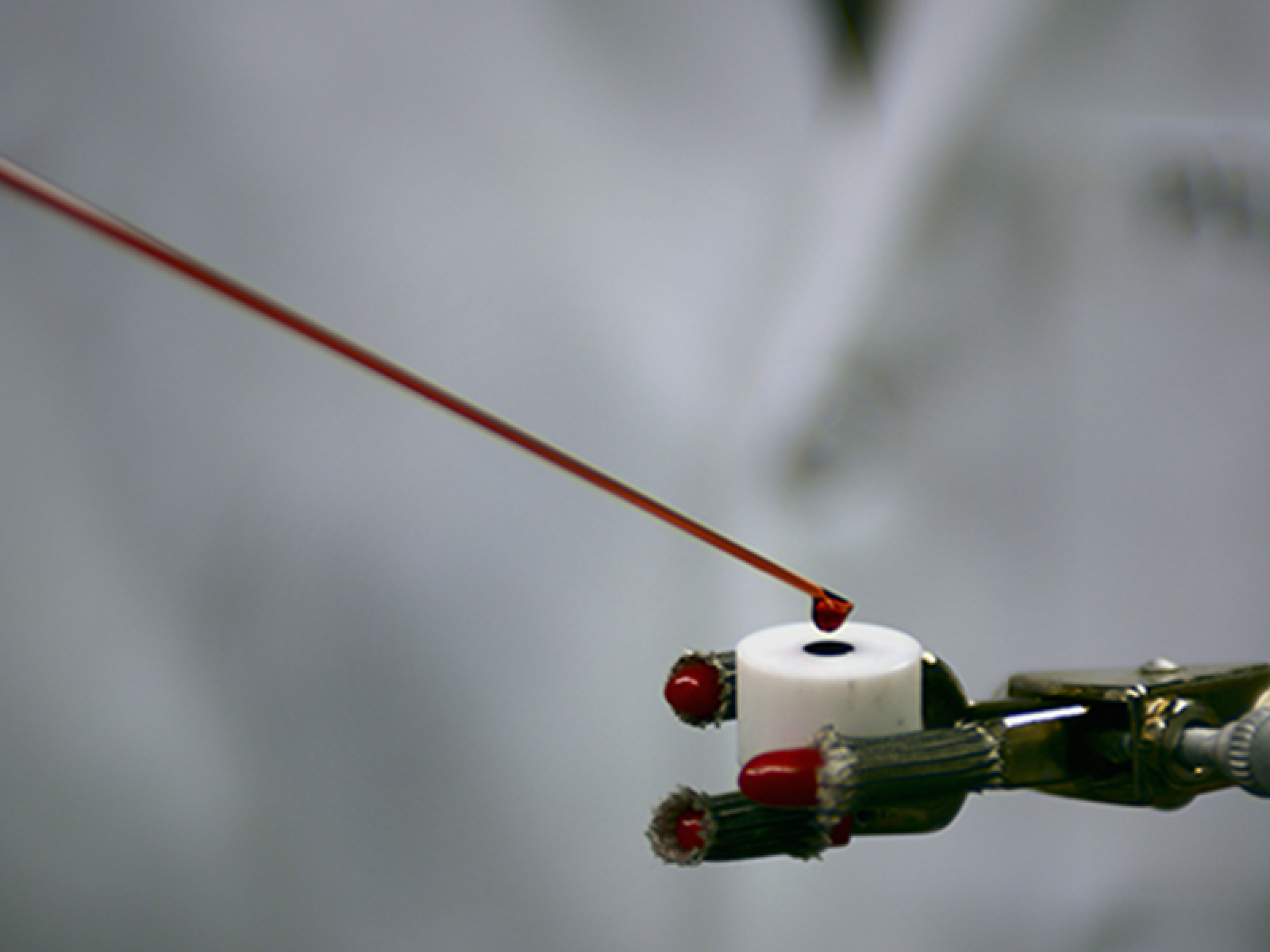 Drop casting a catalyst slurry onto an electrode results in thin layers ready for electrochemical tests.

Quickly, reliably turning wind energy into fuel means looking beyond the catalyst to its foundation, according to a recent study from the Center for Molecular Electrocatalysis, headquartered at Pacific Northwest National Laboratory. Led by Dr. James Mayer from Yale University, the team discovered that the foundation or supporting film has as substantial an impact as the catalyst structure itself. The reason? The technique used to place the support changes the mesoscale environment, the atomic landscape that stretches for several millimeters around the iron catalyst.

Fuel cells could use hydrogen, created by wind turbines, to provide renewable electricity to cool homes, power computers, and drive industry. One challenge is eliminating a side reaction inside the fuel cells that produces destructive levels of hydrogen peroxide. The study shows that fuel cell designers need to focus on the iron catalyst's support material as well as the catalyst itself.

The need for greater energy generation has contributed to a surge of interest in fuel cells and other fossil fuel-free energy technologies that are driven by electrocatalysts. Inside the fuel cell, electrocatalysts speed interconversion between hydrogen fuel and electricity. In this study, the team focuses on the catalyst that handles the fuel cell's oxygen reduction reaction. In this reaction, oxygen and protons left over from the fuel cell creating electricity are combined to create water. Competing with this desirable reaction is a deleterious reaction that forms hydrogen peroxide.

The team examined five iron-based electrocatalysts, known as iron-porphyrin complexes, to determine how they catalyzed the oxygen reduction reaction. Some of the designs incorporated proton relays, which deliver positively charged protons to (or from) the active site of a catalyst.

The complexes were immobilized using three different thin-film techniques commonly used in electrocatalytic fuel cell studies. The immobilization technique changed the mesoscale environment, which is between 1,000 nanometers and a few millimeters around the catalyst. The team evaluated the catalysts for the ability to selectively carry out the desired reaction without producing hydrogen peroxide. They found the catalysts with more proton relays produced less of the undesirable hydrogen peroxide when an ink of the catalyst, made by combining the catalyst with a carbon additive, was dropcast onto a glassy carbon electrode. Catalysts deposited without the carbon additive or placed by physisorbtion on graphite electrodes did not perform as well.

Michael Pegis, a graduate student at Yale University and co-author, said, "From a practical standpoint, we must broaden our gaze into the mesoscale environment surrounding the catalyst. Hopefully our conclusions for oxygen reduction can be useful to groups looking at other important electrocatalytic transformations."

The authors of this study suggest that future investigations of such catalysts look at multiple mesoscale environments to better understand catalysts' performance. Developing solid catalysts on solid films will require understanding and control not only of the molecular properties of the catalyst -- but also the larger mesoscale structure of the whole catalytic process.